Usually by this time of the year, I’ve looked at the calendar to see what breaks I have in the new year and where I’d like to go. The worlds a big place and there’s so much I haven’t seen. I want to go everywhere. 2020 is a big year, being an Olympics lover, and having recently been to Tokyo for the 1st time, I anticipate great things from the Japanese when it’s their turn on the Worlds stage. I took a cool bike tour that I’ll write about later and have video to accompany. Be patient please, I am an IT nightmare and work in progress. My background emphasizes the importance of editing. Anyway, another tangent, typical of me.

It’s impossible for me to fathom making it to all 5 bucket list places for 2020, thus the ‘bucket list’ reference. I’m careful to keep my bills low and have saved a ton of frequent flyer miles and credit card points where I could probably handle one or two. Going down the google flights rabbit hole has often dictated future destinations. I recommend Scott’s Cheap Flights as well. You can sign up for their free alerts and they will notify you, daily, of bargain flights around the world from your departure city.

The acting days have made me a bit of a flight snob, being used to the upper classes and plenty of legroom. The tour guiding career subsequently changed all that, forced to adapting quickly to stand-by and center seats near the lavoratory, between the flu and either sleepy/drool or nonstop verbal noise. I’ve decided that these days it’s destination over flight comfort, which is far more temporary. If it requires a long-haul flight, I just try to book as early as possible and, like Erydah Badu sings, “can I get a window seat…?” To that end:

The 1976 Olympics originally sparked my interest in Montreal. I can’t believe I haven’t been there. I know it’s probably a seasonal destination, having spent a good deal of time in Toronto, one of my favorites. If you can stand the cold, however, it’s probably equally beautiful in the winter. The food scene is incredible and vibrant, I hear, with nearby Quebec City a can’t miss.

Standing in the shadows of Motown(2002) and 20 Feet from Stardom(2014) are two award winning, captivating documentaries about the legendary Funk Brothers, the uncredited and unheralded musicians who were “the Motown sound” in the 1960’s, and the latter about backup singers, peaked my interest in Detroit. I’d like to visit the Motown museum and, being Motor City, would like to learn up close about the history of modern transportation in this country and the city largely responsible for it.

The rich history, the diversity of landscape, people and cultures, anyplace that takes at least 21 hours to get to from Los Angeles should require intense planning for my type personality. I would, however, jump at any opportunity.

Ideally, a month exploring the entire country would be ideal. Until the lottery or publishers clearing house shines and showers, reality dictates that I would probably only be able to swing about 10 days. I watch a lot of YouTube videos and it appears very affordable. Equally fascinating.

Normally I’m not a resolution maker. Feels like I’m setting myself up. Something happened, however, a couple of weeks ago, that caused me to reconsider my stance and make at least one.

While on break at work, I noticed my cell phone acting up. Thinking that it needed to be charged, I did so and suddenly, the screen went blank!  “OK, no problem,” I said to myself. “Just plug it in, it’s fine.” Being technologically challenged as I am, it’s hard to articulate what happened next, suffice it to say the phone lost all my text messages, photos and a great deal of my contacts. For those of you that can relate, you know the feeling of when desperation meets despair landing on the exact 15-minute mark when I had to put it all back and return to work and “concentrate.” As my mind and blood pressure raced out of control, I tried to calm myself down, but, to no avail. Those that know me hear the constant preaching “Your reaction is in your control, what other people do to you is not.” A cell phone is not a person, though I did feel violated. During it all, I saw this in my mind. 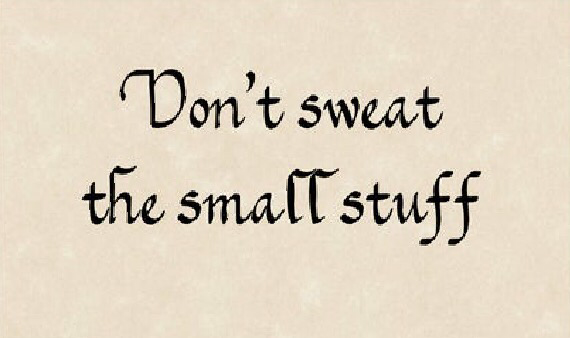 A good friend of mine and fellow actor, Scotty L, used to write this on his bathroom mirror with soap in college at USC. Not that it’s something we all haven’t heard before, but worth writing down where I can see it, or, better yet, resolving to adapt this very simple philosophy to my everyday. It’s certainly helped with the cell phone issue.

Simply want to say your article is as astounding. The clarity on your submit is simply cool and i could think you're a professional in this subject. Fine along with your permission allow me to seize your RSS feed to keep up to date with impending post. Thanks one million and please continue the rewarding work.

Like!! I blog quite often and I genuinely thank you for your information. The article has truly peaked my interest.

Having read this I thought it was very enlightening. I appreciate you finding the time and effort to put this content together. I once again find myself spending a significant amount of time both reading and leaving comments. But so what, it was still worth it!

Long time supporter, and thought I'd drop a comment.

Your wordpress site is very sleek - hope you don't mind me asking what theme you're using? (and don't mind if I steal it? :P)

I just launched my site --also built in wordpress like yours-- but the theme slows (!) the site down quite a bit.

In case you have a minute, you can find it by searching for "royal cbd" on Google (would appreciate any feedback) - it's still in the works.

Keep up the good work-- and hope you all take care of yourself during the coronavirus scare!