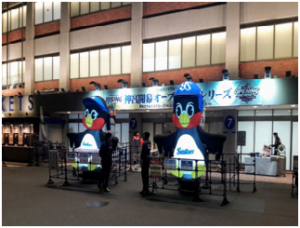 Tokyo Baseball – Singing with the Swallows

How the energy of the game cured my jetlag

“Get up Chris! The game starts in an hour and you have no idea where you’re going!” In a tone very reminiscent of my mother during the bratty teen years, this command played over and over in my head, like an annoying alarm clock set for every 3 minutes, as I lay in the rather comfortable bed of my Nishi-Shinjuku prefecture area Airbnb, a few hours into my first trip to Tokyo Japan. Riddled with excitement, it was impossible to get any sleep on the 10 hour flight from Los Angeles. I tried to tell myself how tired I would be and how difficult I would find it to get over to a baseball game just hours after arriving in a city that’s new to me like Tokyo. The Singapore Airlines flight from LAX was nearly flawless http://www.singaporeair.com from the food to the impeccable service, they never disappoint.

Alas, here it is, less than an hour before game time and I’m bargaining on whether or not it’s worth it given my current fatigue status. As the show must go on, I got up, tried very comically to figure out a Japanese bathtub for a quick rinse that took way too long, and made my way via the efficient Metro (suica card recommended) and the trusty Google Maps.

The Meiji-Jingu Stadium, built in 1926 and Tokyo’s oldest is, like many landmarks in this massive city, appear instantly amidst a sea of buildings, mini parks and temples. In my mind I went back to my New York City days and the quick pace of the city’s inhabitants. Before I knew it, I was at the stadium kiosk attempting to redeem my printout for a hard copy ticket, apparently required. After 20 minutes of staring at it like a dog who has had his food dish moved, a nice gentleman approached me and asked if he could assist me. I was so thankful, I nearly gave him the entire contents of my wallet.

Making my way up the flight of stairs leading to the seating area, I could feel this rush of energy combined with my Fitbit congratulating me on 10000 steps, so it was a definite rush. When revealed, it is an immediate assault to the senses, the vibrant blues and greens of the team colors with most of the crowd dressing in kind. The Beer Girls running back and forth in a frenzy carrying keg sized backpacks full of Japanese beer and spirits. Music and the smell of different foods massaging the humid night air as the crowd sings the Tokyo Ondo and twirls colorful umbrellas every time there is a score. As I stood there taking it all in, it occurred to me that the seats were incredibly small looking relative to my current density and the fact there were no ushers, just beer girls. Intimidated, I stood there and took a bit of video. 5 innings later, still standing there, I realized I was having the best people watching time ever.

I learned a couple of things about going to a Japanese baseball game after the fact. While I had an amazing time, I didn’t realize that an open seating area was available for only about US$10. I could have saved myself a bit of anxiety early on. Also, bringing in your own drinks, even alcohol is allowed at the Meiji-Jingu stadium. http://www.jingu-stadium.com The Tokyo Swallows season runs from April through September. Highly recommended. 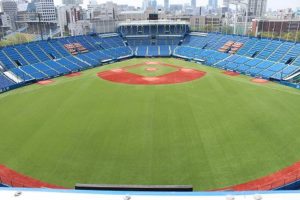 You can also view the video at https://www.youtube.com/watch?v=7u_i88XY0ro&t=46s