Have we forgotten how to laugh? 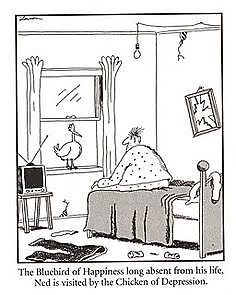 “Laughter is the language of the soul.” Pablo Neruda

Remember when the general consensus was that 2021 was bound to be a better year than 2020? Surely we’d be back to a sense of ‘normalcy’ by now and past that horrible year of disease and division. Communities would come together, putting public health a priority and we’d all have jobs again and the kids would happily be back in school. All the industries would return to full strength and we’d join hands and collectively celebrate our triumph over evil by singing “Kumbaya.” 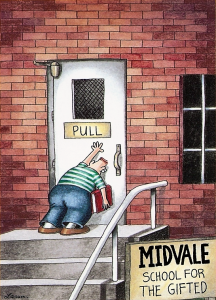 OK, maybe that last line was a bit sarcastic. In my opinion, however, 2021 has not been a better year. Death, illness, hopelessness, sleepless nights and panic attacks, amongst others, have carried over into this year and beyond. As a result, normal has been replaced with awkward and weird. Trust has almost been completely removed from my thought process. Paranoia and fear pervade the air like a bad stench. Where has the laughter gone? 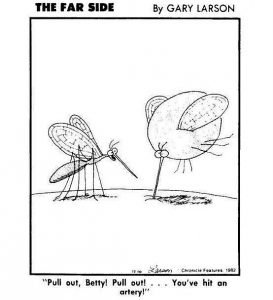 “Laughing is, and always will be, the best form of therapy.”

I was introduced to Gary Larson and The Far Side in drama school in England in the Eighties. The above, with the mosquitoes, was on my friend, Scott’s wall in the dorms. We’d smoke hashish after class and laugh endlessly at the American cartoonist’ humor. Then, we’d take that long and often freezing walk down Gloucester Road to the 7-11 to gorge on McVities digestives and Twix bars. Sometimes we’d be asked to leave the store we’d be laughing so hard. The cold London air in winter sobering us up enough to compose to go back in and restock.

Since 1970, only 3 comedy films have won the Oscar for Best Picture. The Sting (1973), Annie Hall (1977) and The Artist (2011). That was surprising to me. I thought that great films like Tootsie and A Fish called Wanda had won but I was wrong. There is a clear genre bias in Hollywood as comedy is so subjective. People laugh at different things, I get that, but, when did laughter become offensive? Isn’t that the point? Are we so sensitive that we can’t laugh at ourselves anymore? Would the above scene from the classic movie Tootsie be offensive today?

I blame social media for the downfall of comedy. What was once ‘sharing information’ has become a bastion for hate, jealously and narcissism with everything being an illusion. The anonymity, which allows for abhorrent behavior that would never be accepted before the invention is now commonplace. It’s a digital draining of genuine human emotion. As a result, tribalism and likes now dictate if it’s ok to laugh. The poor stand-up comedians are having it harder than ever. Sketch comedy and improv almost DOA.

“When you love and laugh abundantly you live a beautiful life.” 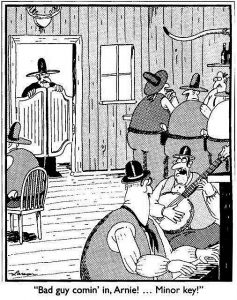 Laughter relieves pain. It helps your heart. Boosts your immune system. Reduces stress. Relaxes your body and makes you happier. It should be a daily required emotion. While I know the things I’ve posted may or may not make you laugh, my hope is that you seek to make it a priority. My Father used to always say “Life is less what happens to you and more your reaction to the things that happen to you.” While inappropriate to react with laughter through every situation, I feel that choosing it brings so much benefit. The last 2 Mothers day blogs Here’s to the Moms, I included clips from Amy Borkowsky’s  Amy’s Answering Machine, to great approval from you, my reader. I’ve edited a few more clips for the Crack, as the Irish say. Enjoy!

Do you prioritize laughter? What makes you laugh?

Wise words, Chris, and some of my favorite Far Side cartoons! The whole world needs to laugh more - it helps people heal - Norman Cousins wrote a book about it. My favorite memory of my father (whose greatest gift to me was his sense of humor) is giggling with him, sometimes uncontrollably, at silly jokes. You help us laugh, and think, and care. Bravo!

Hi! Great blog! Laughter is the best! I remember working with you and laughing so much!! Great memories! I hope that you're well! XOXO, Jordan

Thanks Jordan. The best to you and Sam and the kids!

Okay I woke up at 2:11 a.m. I have no idea why. It's unusual. But as I listen to Ms. Bukowski's final messages I'm wondering if my instincts knew this blog was here and that's why I woke up. Well I've been laughing my ass off! Thank you, Chris.

Now this is a Good Morning! (and now my neighbors are sure I'm crazy).

Thanks Miche! The Rye bread is my favorite!

I remember being asked to leave a hospital room because there was too much laughter. Isn't laughter still the best medicine?

It definitely is, Beverly!