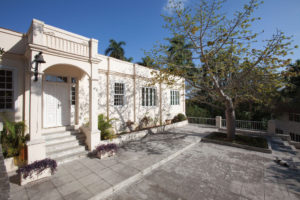 This is the restored Hemingway house turned museum, Finca Vigia or Lookout Estate, after a preservation effort with both adversaries, Cuba and the United States, in a rare show of cooperation to restore the place the much beloved writer spent 20 years of his life, leaving just one year before his tragic death by suicide in 1961.

It was our last day in Cuba. Sad to leave the magical country that provided us with a lifetime of memories and also mosquito bites to itch our way through the next month back in the states, the few remaining tour mates and I, Jessica, Betsy and Peggy, decided to go see the Hemingway House before our late flight back to Los Angeles. (4 1/2 hours direct to LAX no longer available on any carrier). Our exemplary tour guide, Valeri or Val, arranged for us to go in those old cars/taxis from the 50’s and we piled in for about a 30 minute ride from Havana to San Francisco de Paula, a suburb 12 miles to the east. 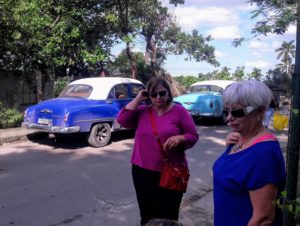 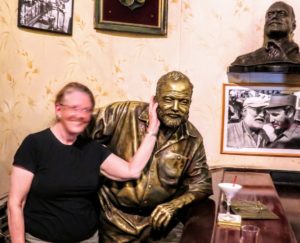 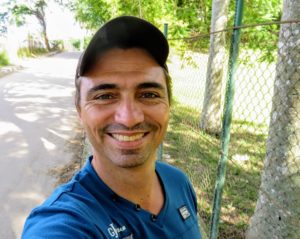 When we got there, despite the guidebooks and checking the internet, a feat in and of itself in Cuba, it was closed. Valeri spoke to the guards and was told it was due to renovations. With our diasappointment palpable, slick Valeri then began what appeared to be negotiations with the guards and after a moment, came back to the group with this response. “They said for $10 (Cuban pesos), the big one,(pointing at me), can hop the fence and go take some photos, or, for $5 he, the guard, can take one of your cameras and do the same.” Deciding immediately that the “Big one” was not feeling that level of risk on my last day in Cuba, we opted for the latter option. We wandered around the outside of the 12 acre villa surrounded by a high, now graffiti laden wall and took a few photos and a short video with my cellphone. 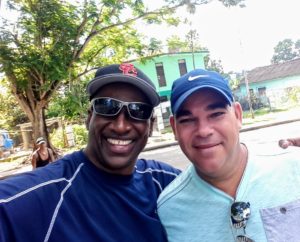 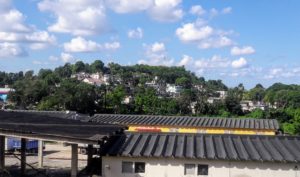 When he returned, 45 minutes later, we thanked him and then rushed Valeri over to the bus station as he was headed home in between tours. Being remedial at anything technological and using this point and shoot for the first time in Cuba, I really didn’t have any idea the extent the guard went through to get a comprehensive photo tour of the famous estate first rented and then owned by the Pulitzer and Nobel prize winning author of 7 novels including The Old Man and the Sea, which was mostly written at that house. A decade ago, the house and the grounds were in disarray, mold and decay growing, roofs sagging, but the joint Cuba/USA effort to restore the place back to its 1950’s glory with Papa entertaining the likes of Gary Cooper and Ava Gardner, who is said to have skinny dipped in the pool, were nearly complete. The photos showed his office, bathroom where he recorded his daily weight, the study, the swimming pool and his beloved boat, Pilar, now dry docked where the tennis courts once were. The results were priceless. A private photo tour. 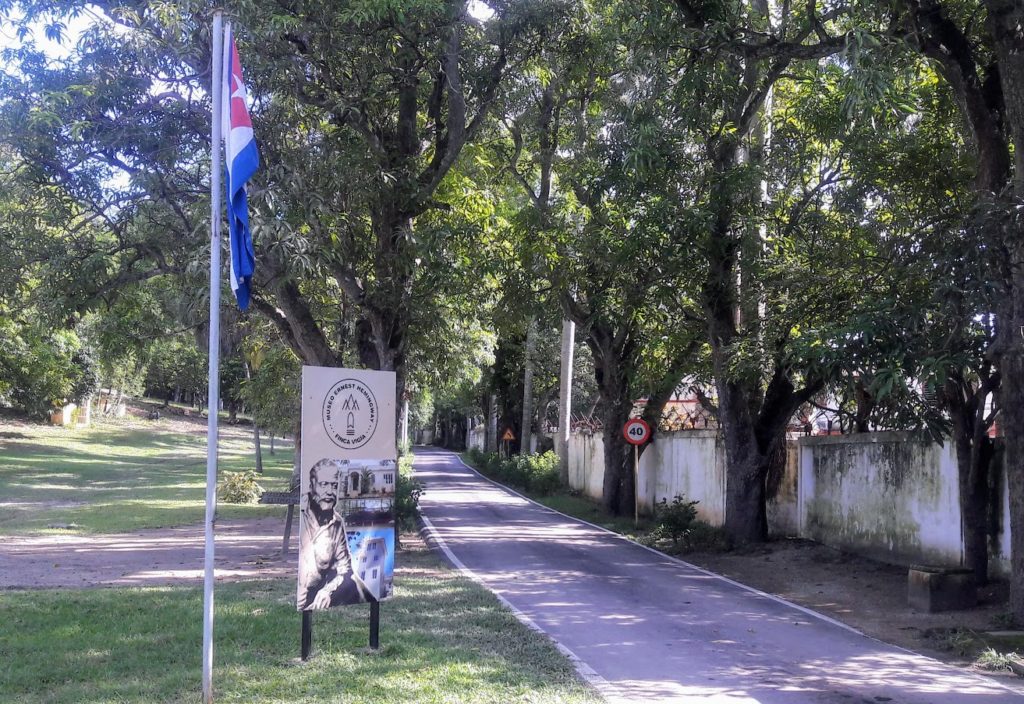 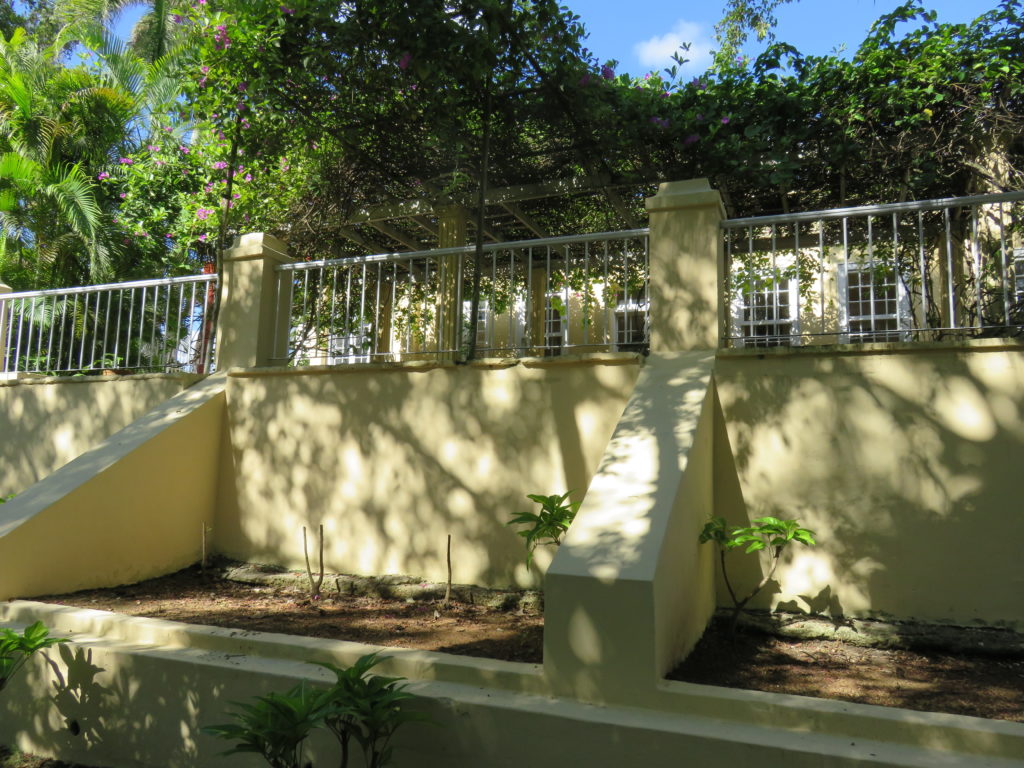 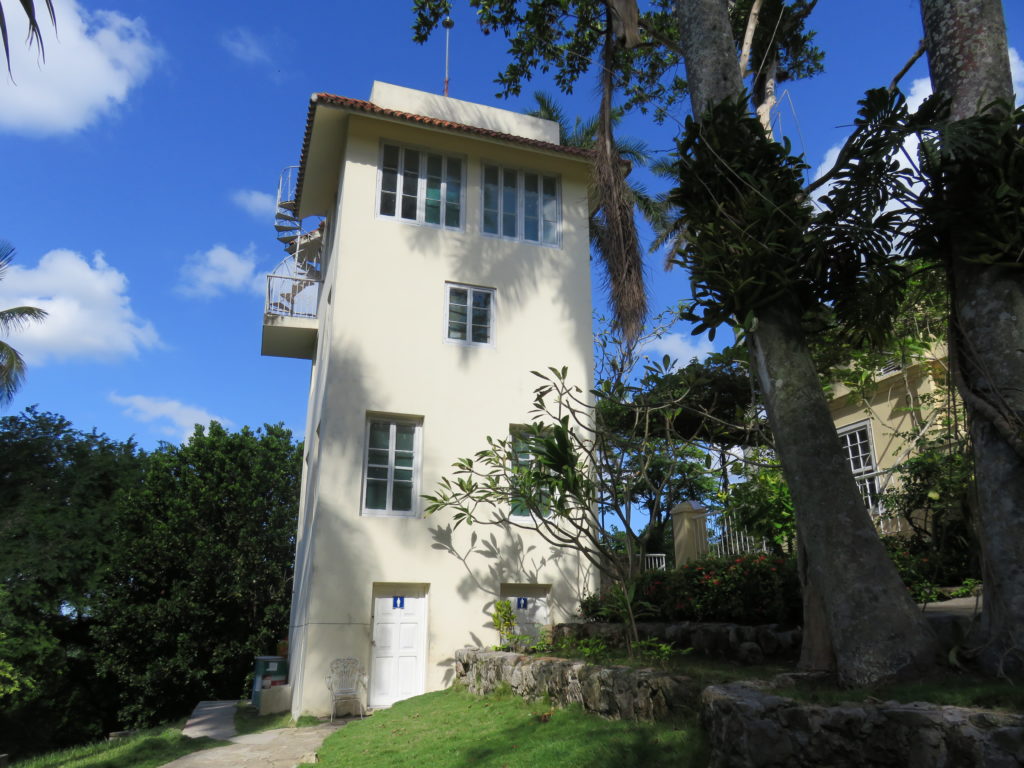 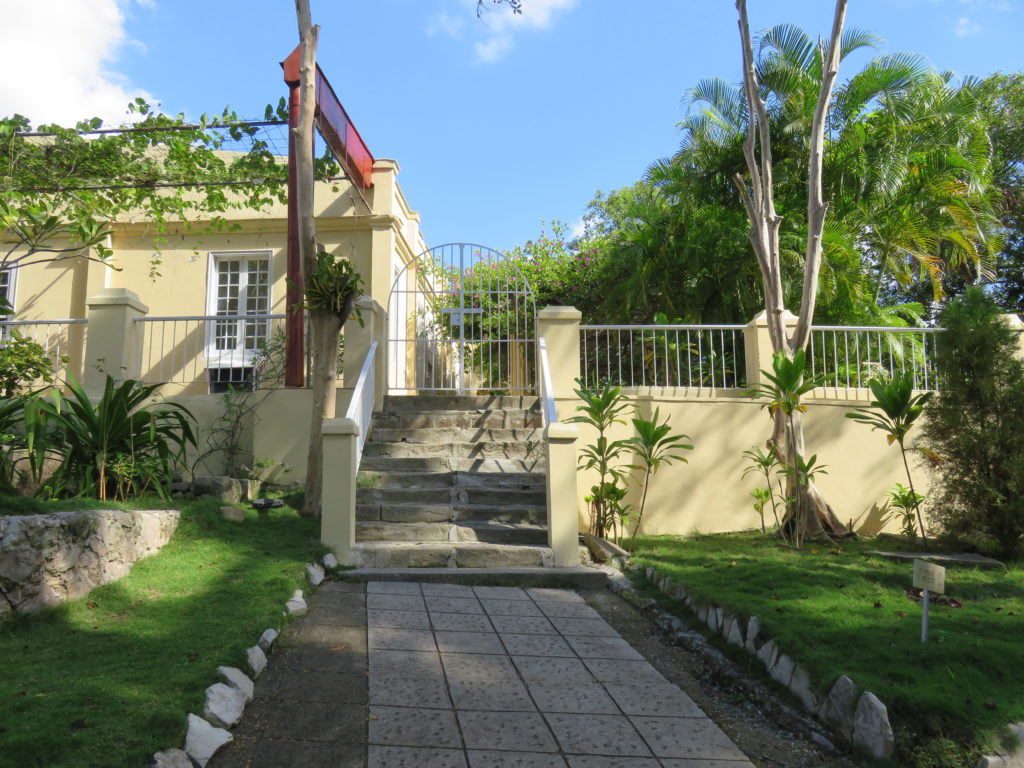 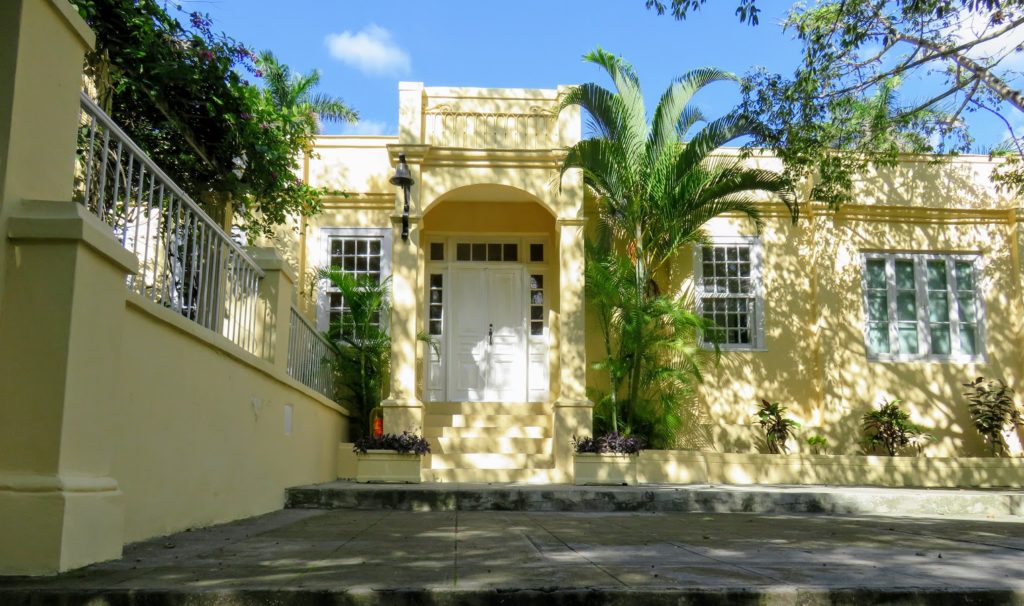 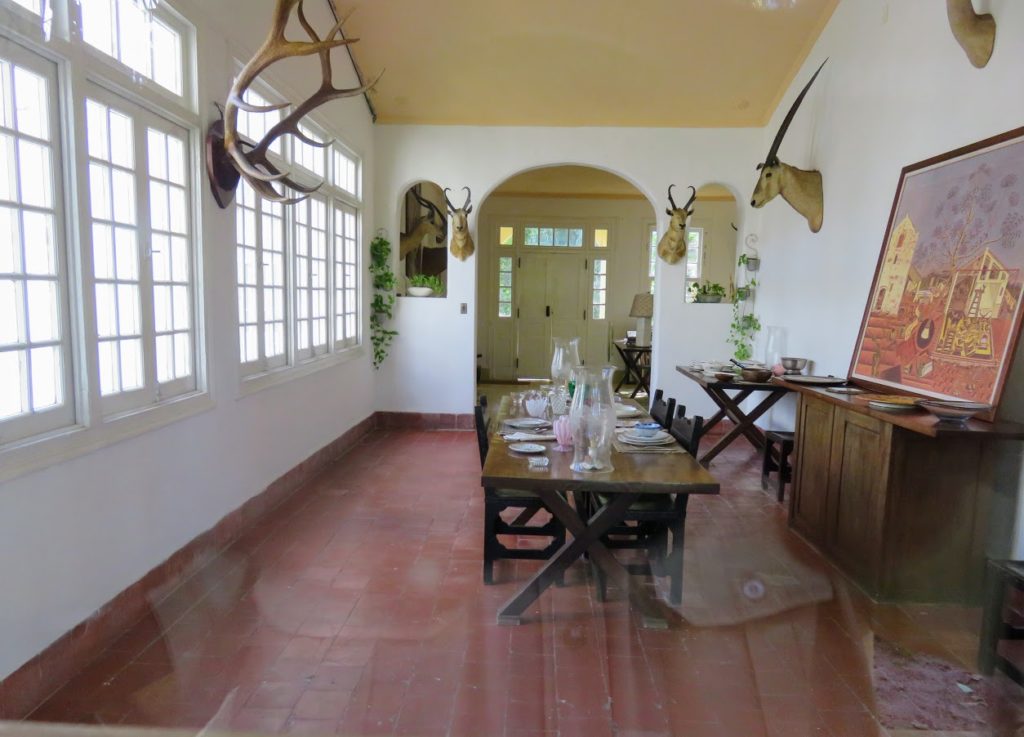 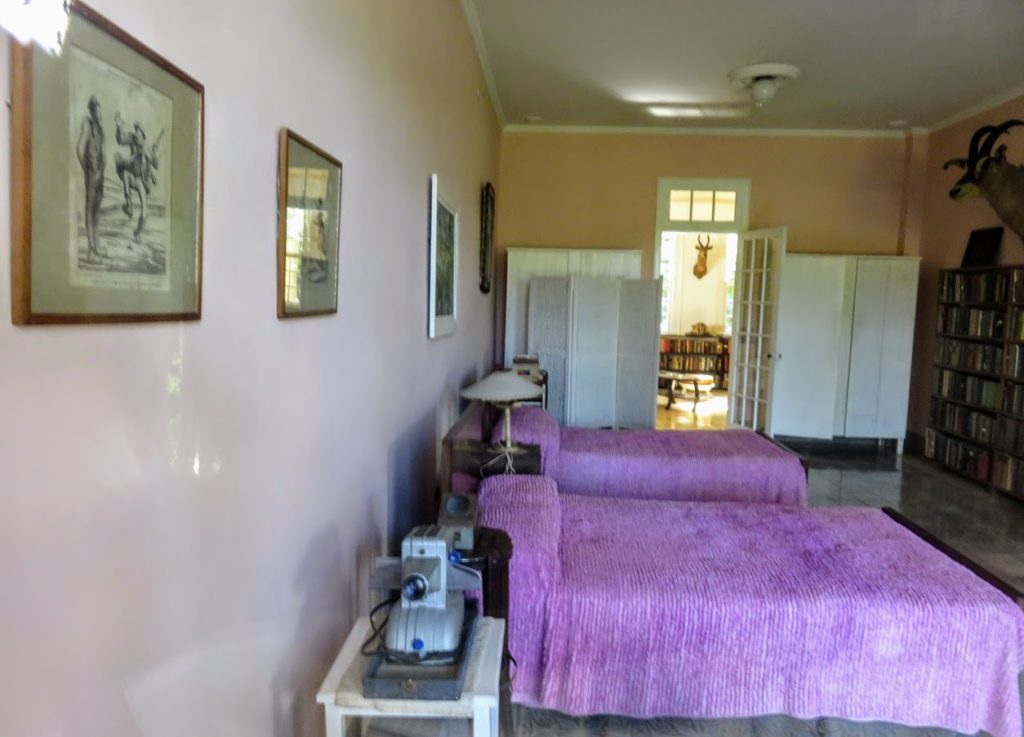 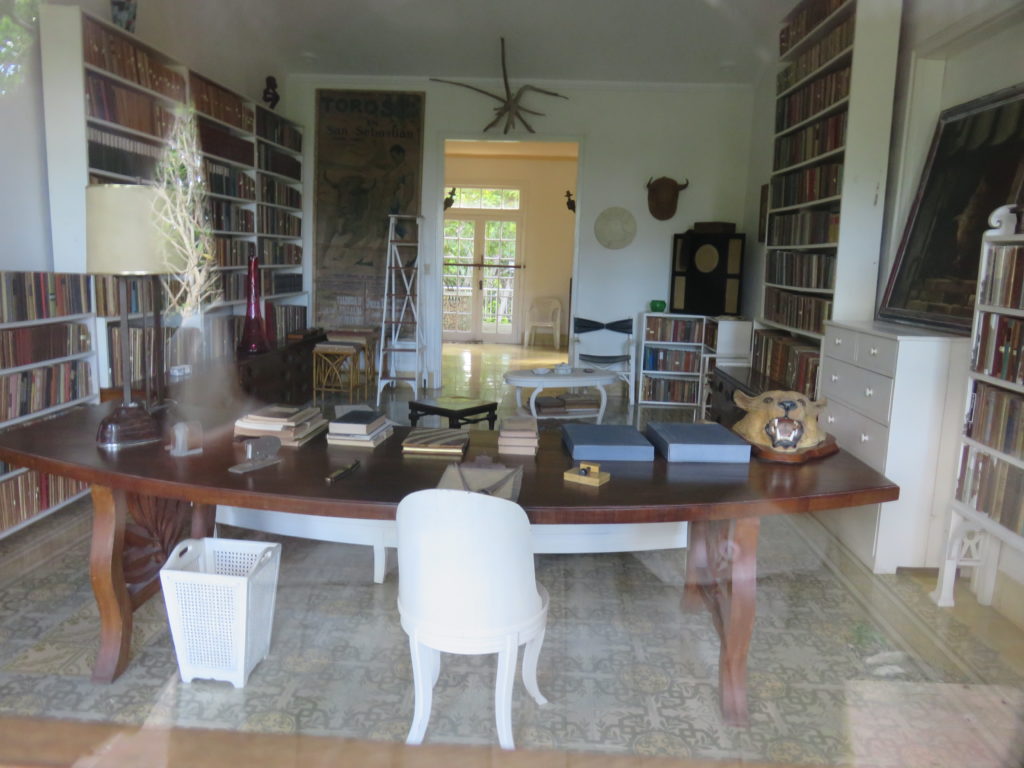 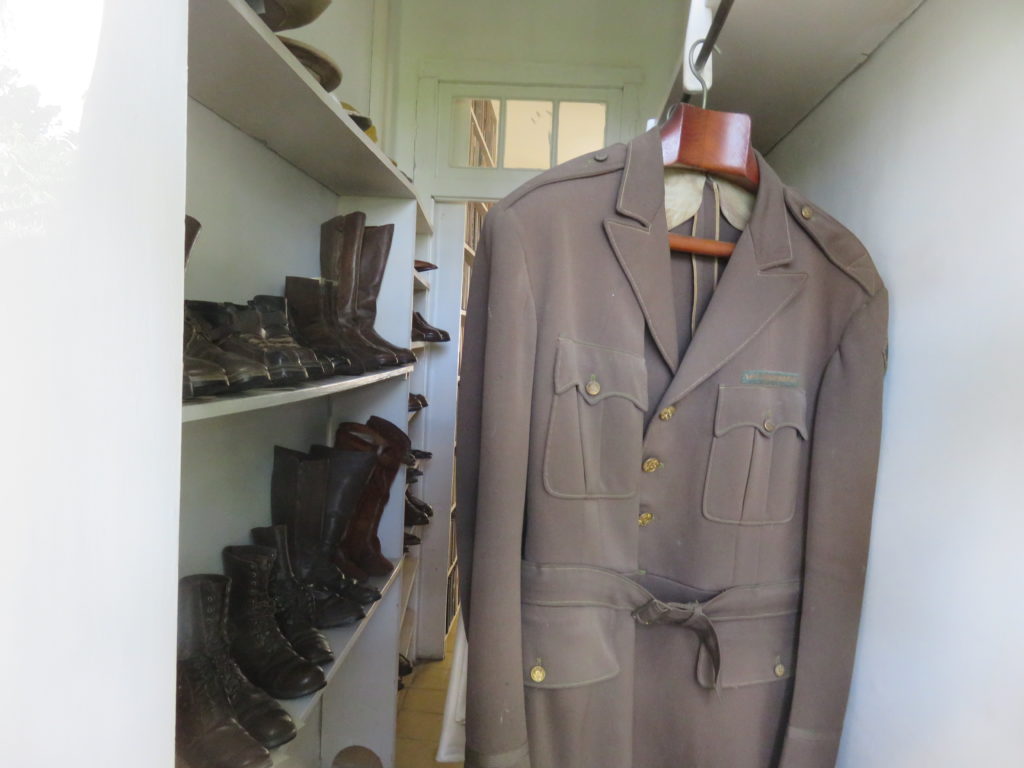 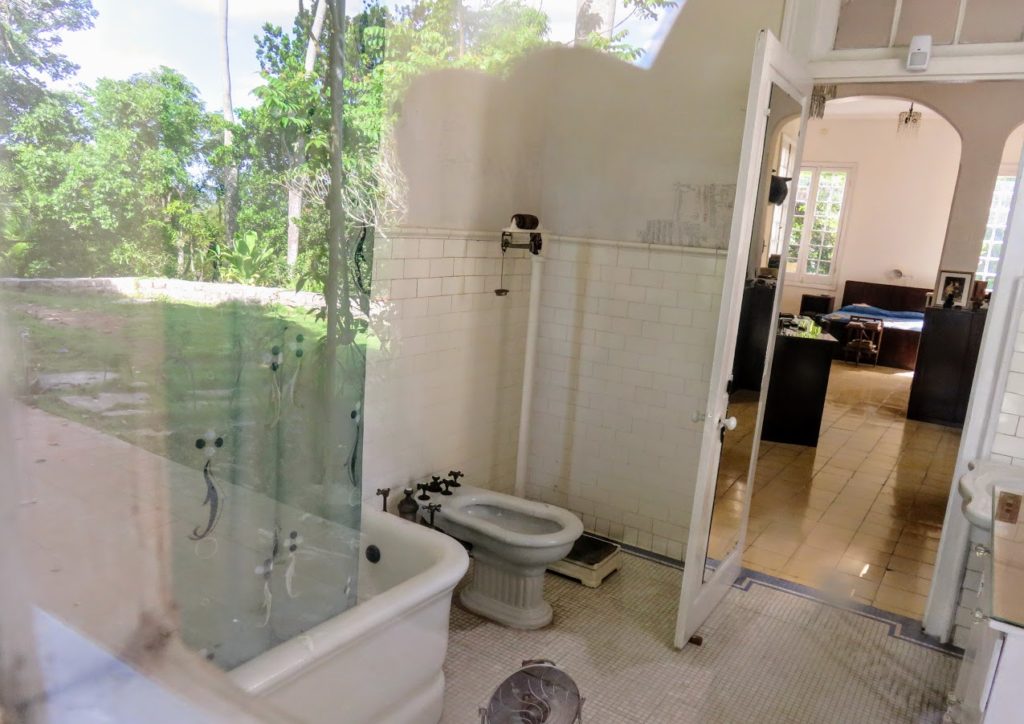 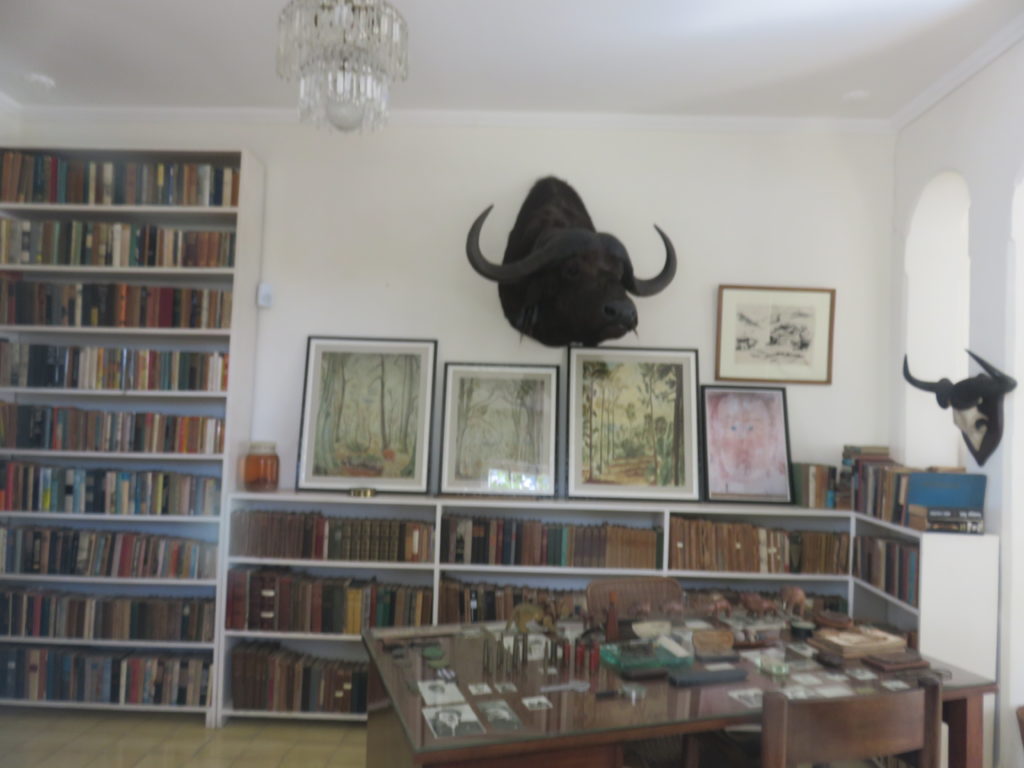 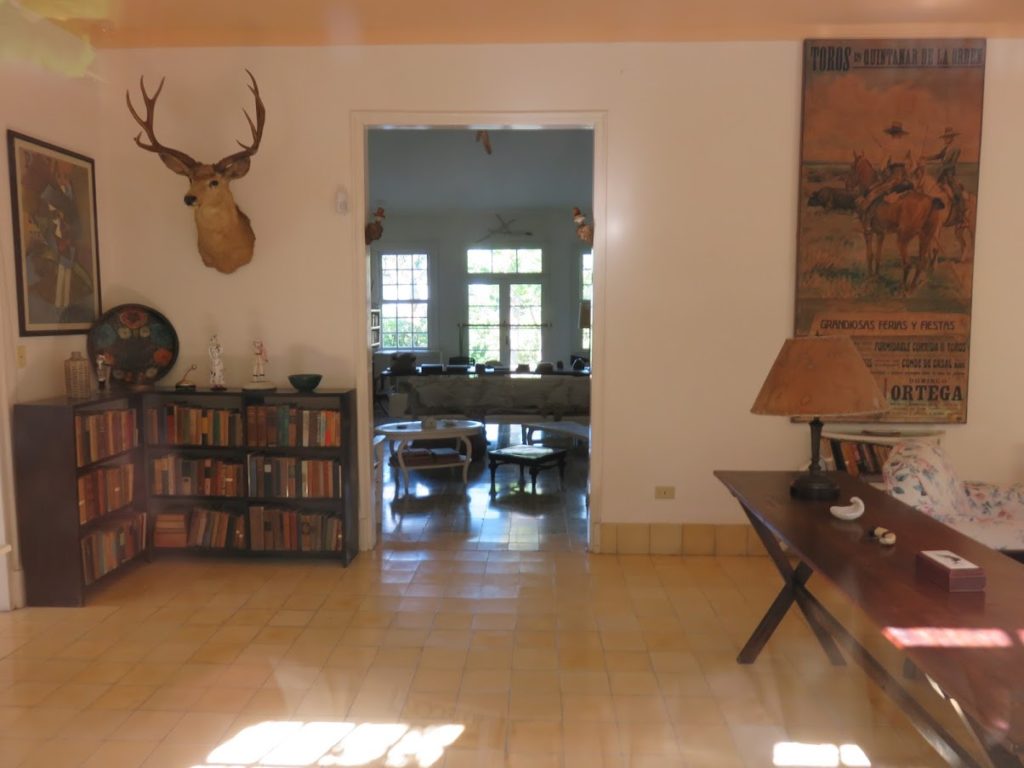 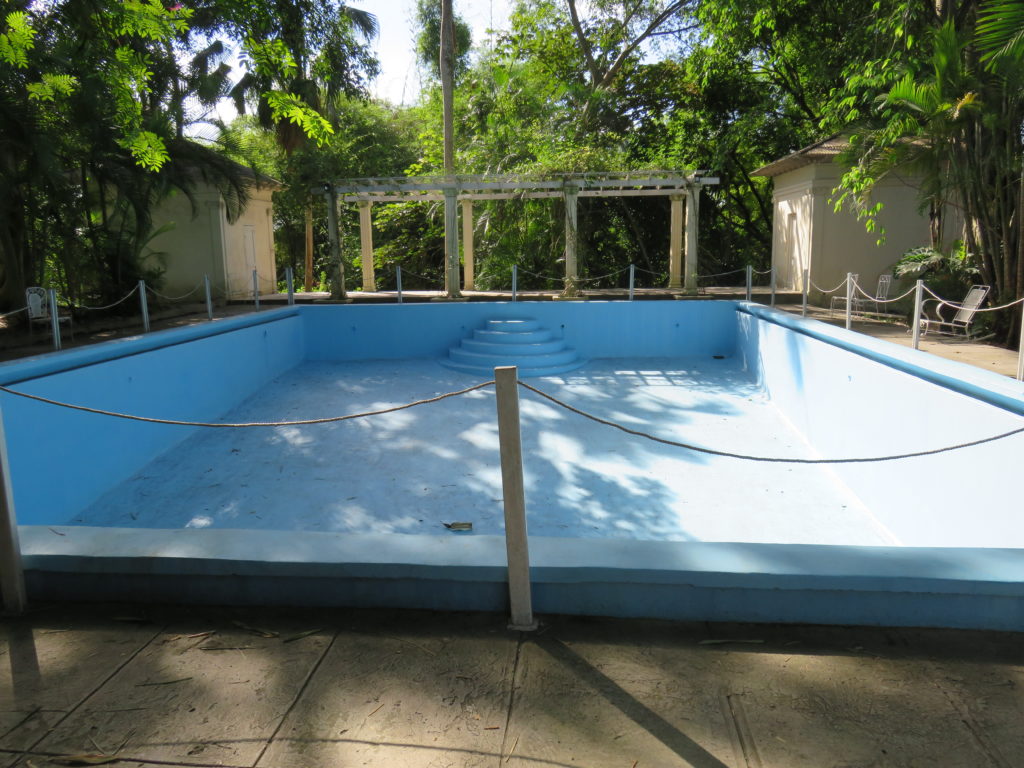 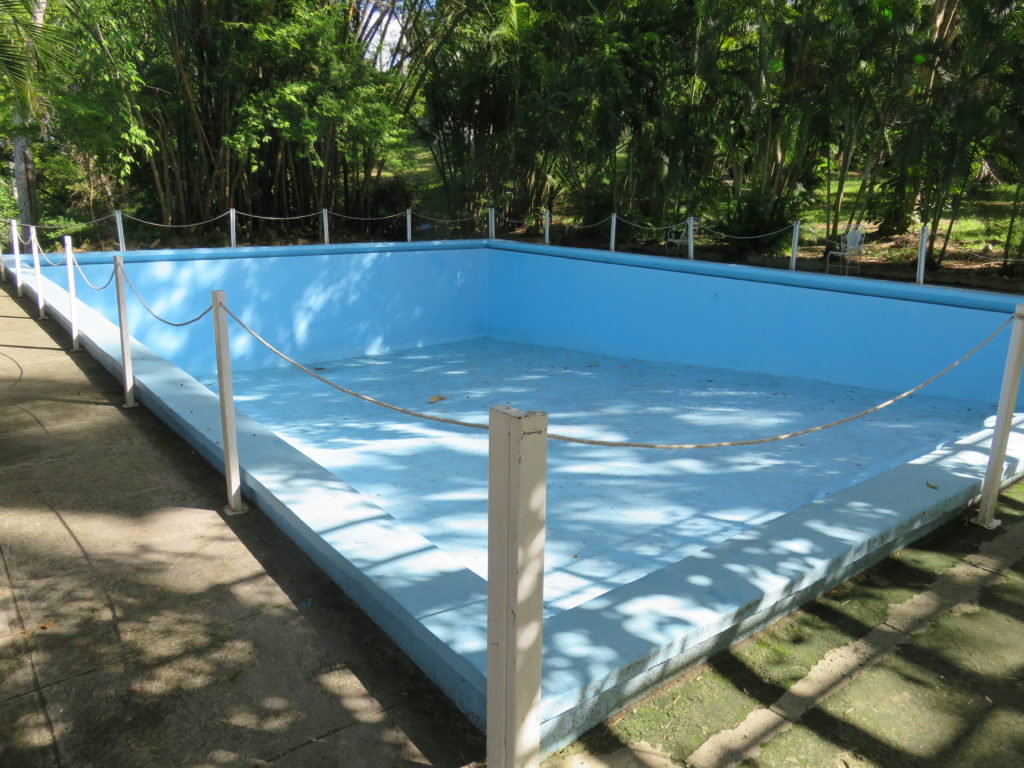 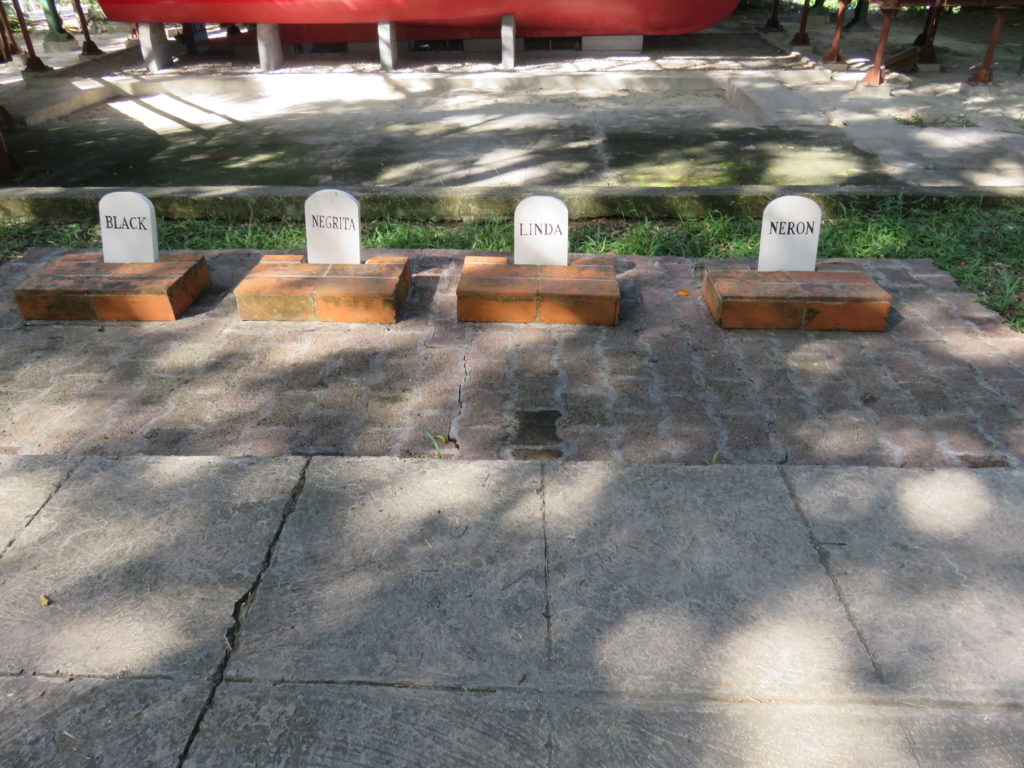 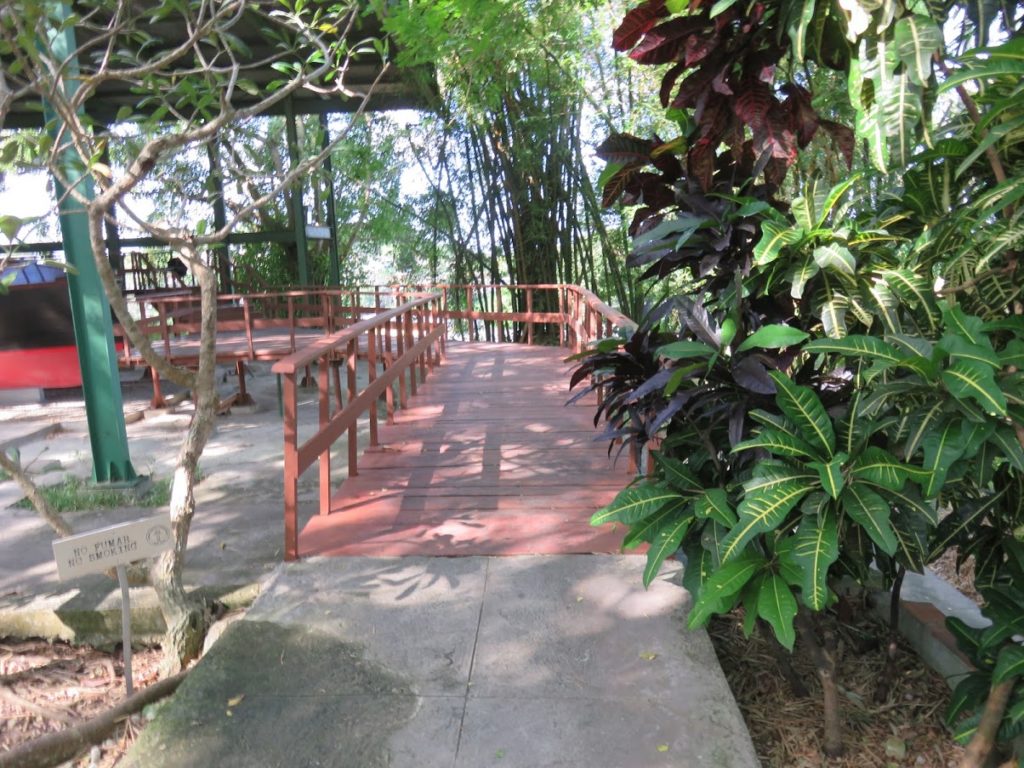 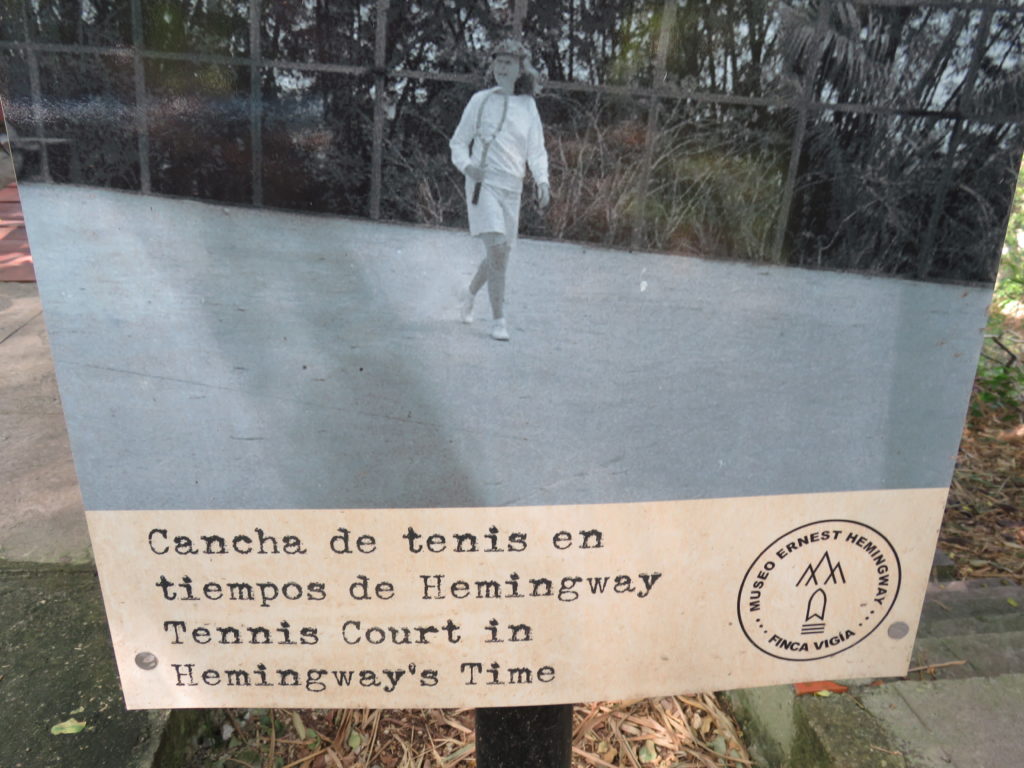 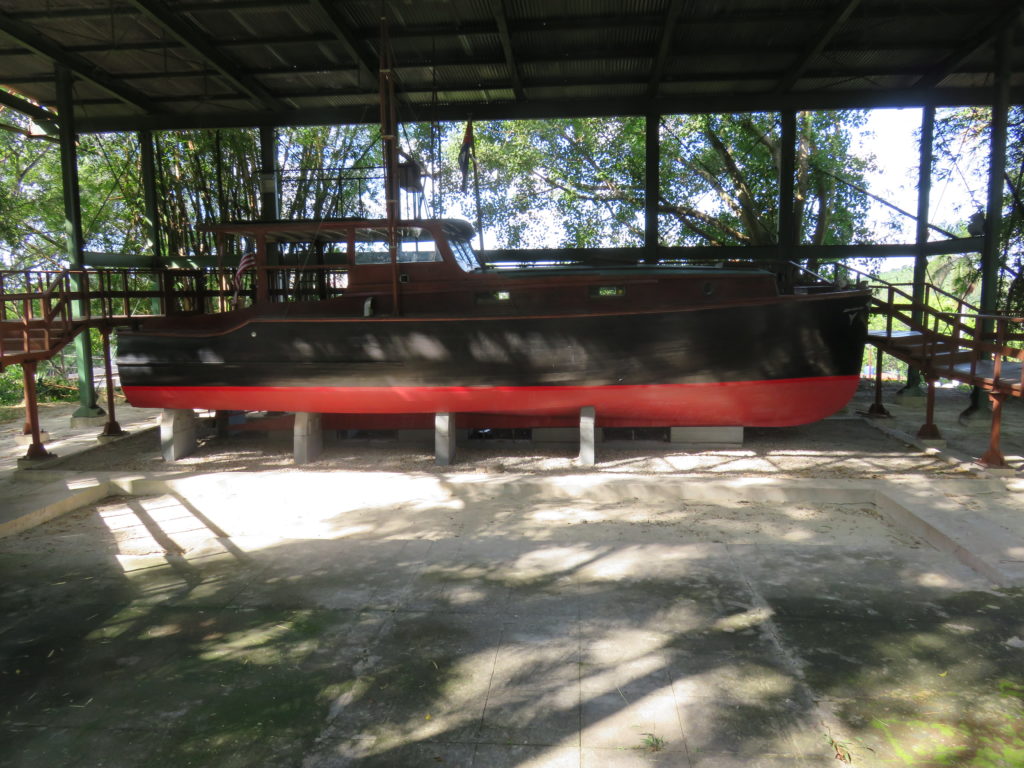 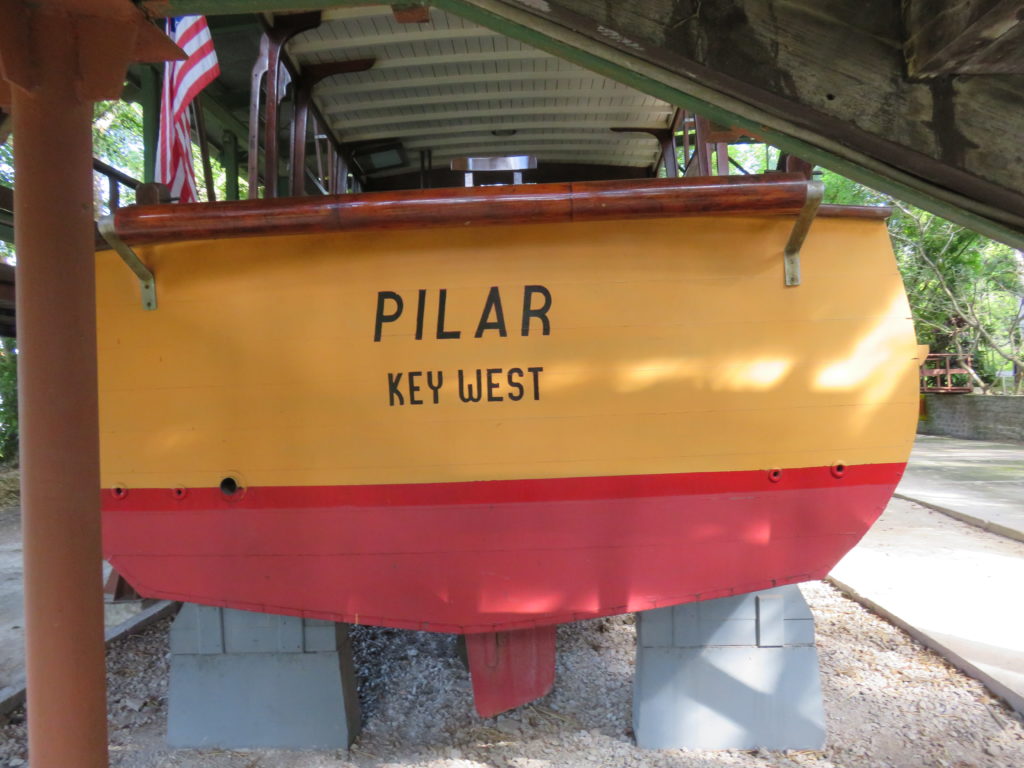 My fascination with all things Hemingway has only grown since traveling to Cuba and “visiting” Finca Vigia, if only through the kindness of the security guard who took the big one’s camera (mas grande) and comprehensively shot photos of Papa’s last real home like a professional. Currently reading The Old Man and the Sea, its easy to see how his writing continues to inspire to this day. I hope to return to that magical island again, with Finca Vigia, Mojitos, the spirit of Papa and the incredible people leading that draw. 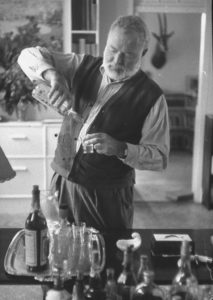 The Old Man and the Sea was incredible. That was my first Hemingway, not my last. I finished The association of small bombs by Karan Tahajan and highly recommend it. A dramatic read that takes place in India.