Chile-How the Andes almost claimed me 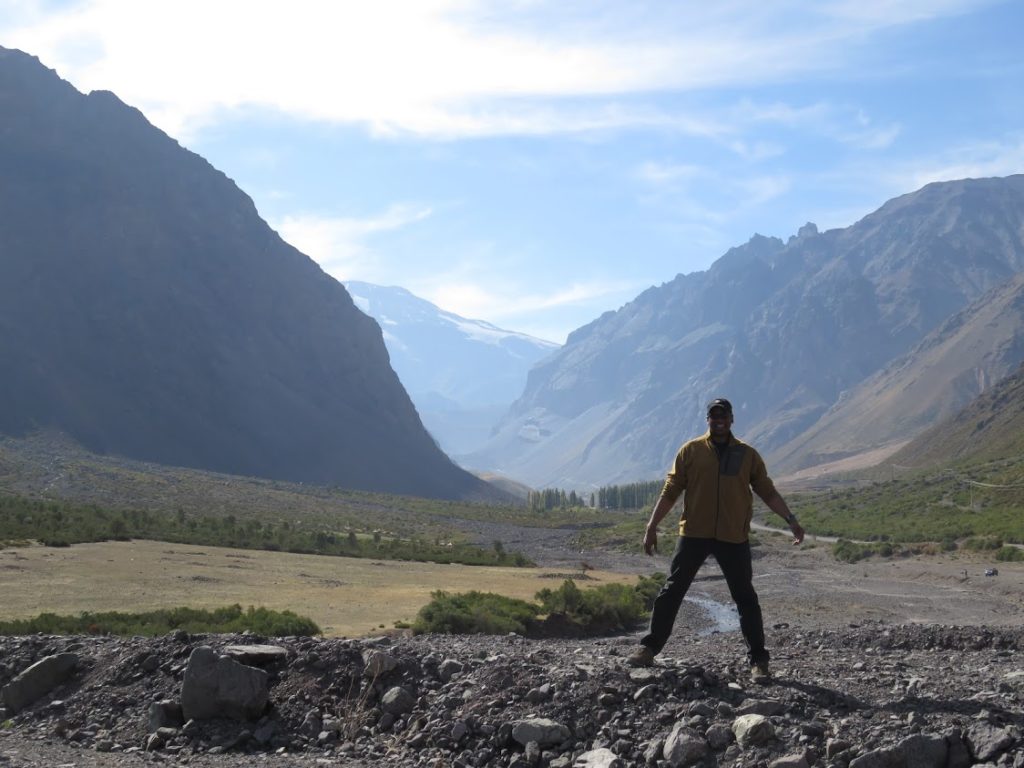 “I’ll be fine, you guys go ahead.” I didn’t feel fine, my heart racing near uncontrollably after being physically ill a number of times in a short period, mostly water and gatorade, but, after gathering myself and trying to catch up to the group, I finally just collapsed, disoriented and depleted and propping myself against a huge volcanic rock telling the guide, Francisco, that I would remain there and wait for the group to come back. As I began to drift off, knowing it would be hours before they would get to the top, have lunch, then come back to collect me, feeling embarrassed and yucky, I wondered if I would have enough strength to make it back down and how the hell did I get here?

The 530am wake up call jolted me out of the very comfortable king-sized bed in my hotel room in Santiago, Chile, on day 3 of my weeklong, first trip to the South American continent. I had worked out at the hotel gym the night before and, remembering my old marathon days, carbo loaded with this terrific pasta meal in a nearby restaurant. I wanted to be prepared for the days ‘Glacier hike at El Morado  from Santiago’, an all-day tour from AndoAndes, the leading outdoor adventure tour company in Santiago, where they pick you up from your hotel, drive 93kms (57 miles) to the El Morado National park, where you then hike about 8K (5 miles) in the beautiful Andes Mountains to the San Francisco Glacier, starting at Banos Morales, a mountain village at 1900 meters (6200ft) above sea level. 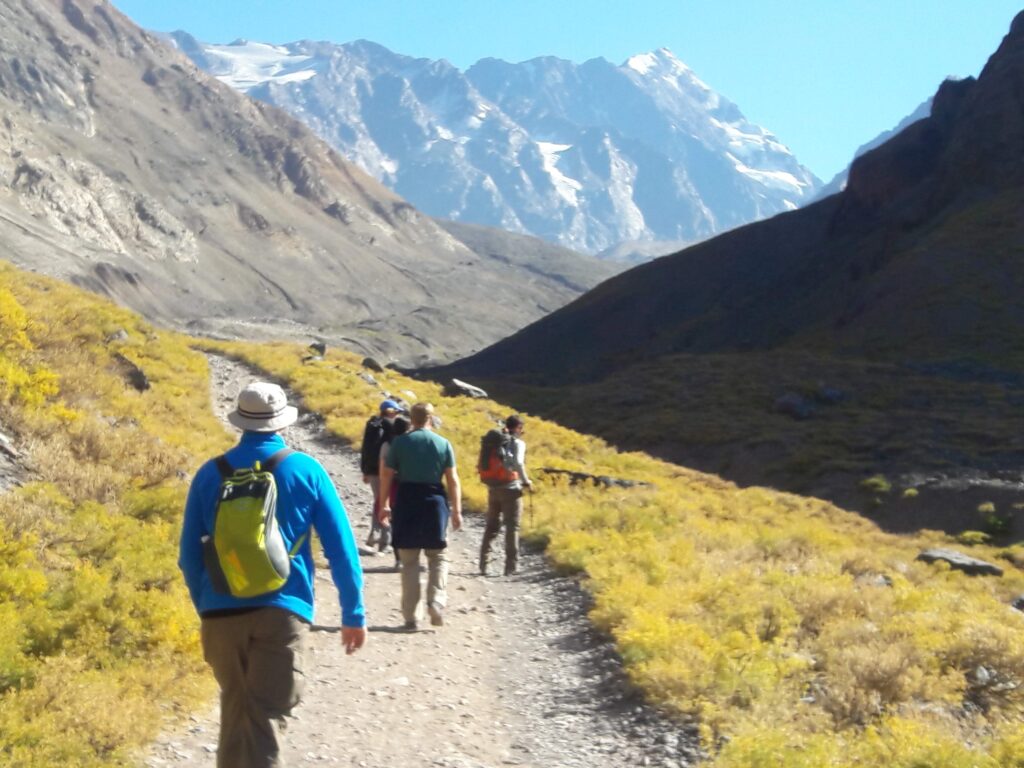 On the 3+ hour drive, I met the other 4 participants, guide Francisco and driver Manu. I was my usual actor/entertainer/tour guide self, bonding us together in preparation for this incredible day. I had even brought some homemade caramels which I use as ice-breakers when I travel. I thought I’d break them out at the end of the hike and we’d all toast to a successful day in the Andes.

Francisco told us that the first hour of the hike is steep and then it becomes flatter. The altitude increases 600 meters (1900 ft). We take a trail that leads to the Glacier (8200ft) and the Morales Glacier lagoon. Have a provided box lunch and then return, about 4 hours round-trip. The minute we got out of the van I could feel the altitude. The energy and the power of the Andes mountains is palpable and I tried to at once control my breathing, taking in the valuable information that Francisco was telling us, and not stick out as someone who was struggling. After moving more and more slowly, I volunteered stupidly to climb up this rock for a cool photo. (I didn’t even have social media at the time, so you can’t say “it was for the Gram!”) I jumped down, took 5 steps and began a series of stop-and-pukes (sorry, TMI), while all my preparations (turned out, overly) left my body and, after an hour, only a shell of myself remained as I pleaded with the group to leave me where I was. I finally convinced Francisco that I would be okay. “Just rest here and eat when you can. Enjoy these mountains, there’s a powerful energy to them.” 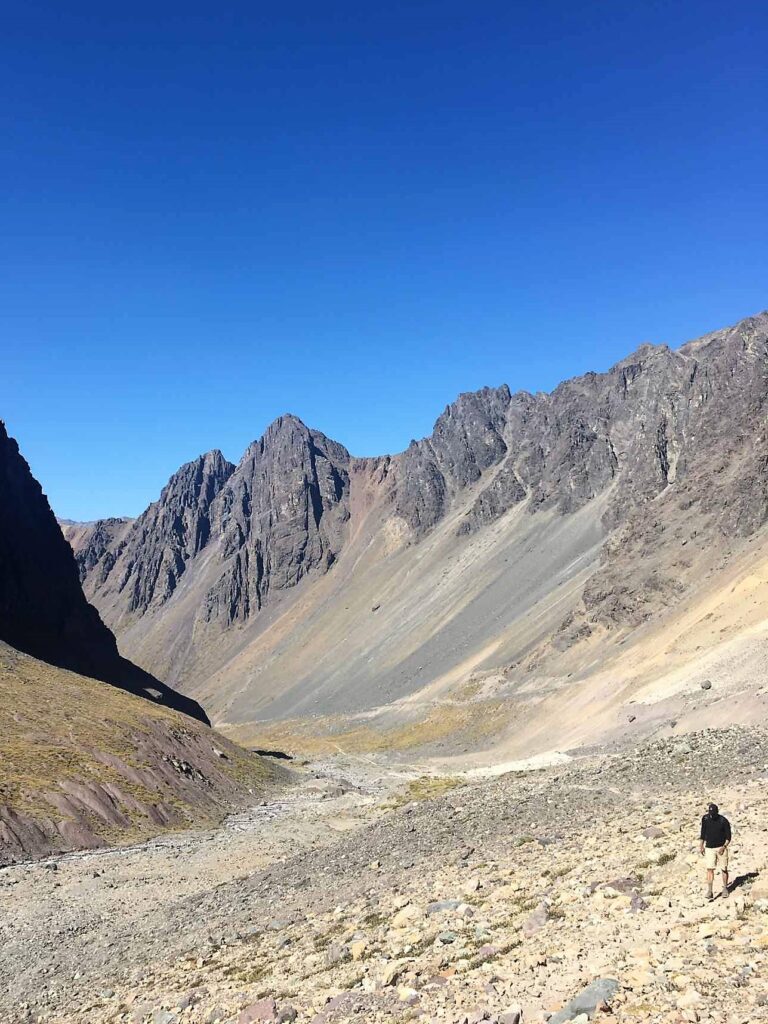 It wasn’t long before Manu came along. Originally from Rapa Nui (Easter Island), we marveled at how he climbed the mountains effortlessly, taming wild horses, he seemed at one with the Earth. “Come with me, can you?” he asked. I looked at him as if to say, “Are you kidding me?”, but, his voice and spirit lifted me to follow him down out of the mountain and back to base camp. I fell asleep in the van and awakened to hear the group returning. I felt fine by that point and joined everyone for Chilean wine, treats and my on-hit caramels. I had also committed to coming back, with Manu, 2 days later to try again, this time on Horseback. What?

The video tells the story of Manu and I horseback riding in the Andes Mountains. Although I reluctantly agreed to go back with him, it had been decades since I had been on a horse and had planned to spend the day in Santiago shopping, there’s a trust in Manu’s eyes and I felt compelled to say Yes. A willingness to be open to exposure and being flexible provided me with the opportunity of a lifetime. 2 years later, I can close my eyes and feel the beauty of that day. It was only he and I, a rare opportunity, and we never saw another human being after leaving base camp. The quietness, with the wind and the horses being the only sounds made. The sun, seeming so much closer and more powerful. The peaks, rising almost to the heavens on either side of you, protecting and giving out warnings, like guardian sisters. By the time we reached the San Francisco Glacier, I was so emotional I could barely speak. I climbed off the horse and tried to take it all in. 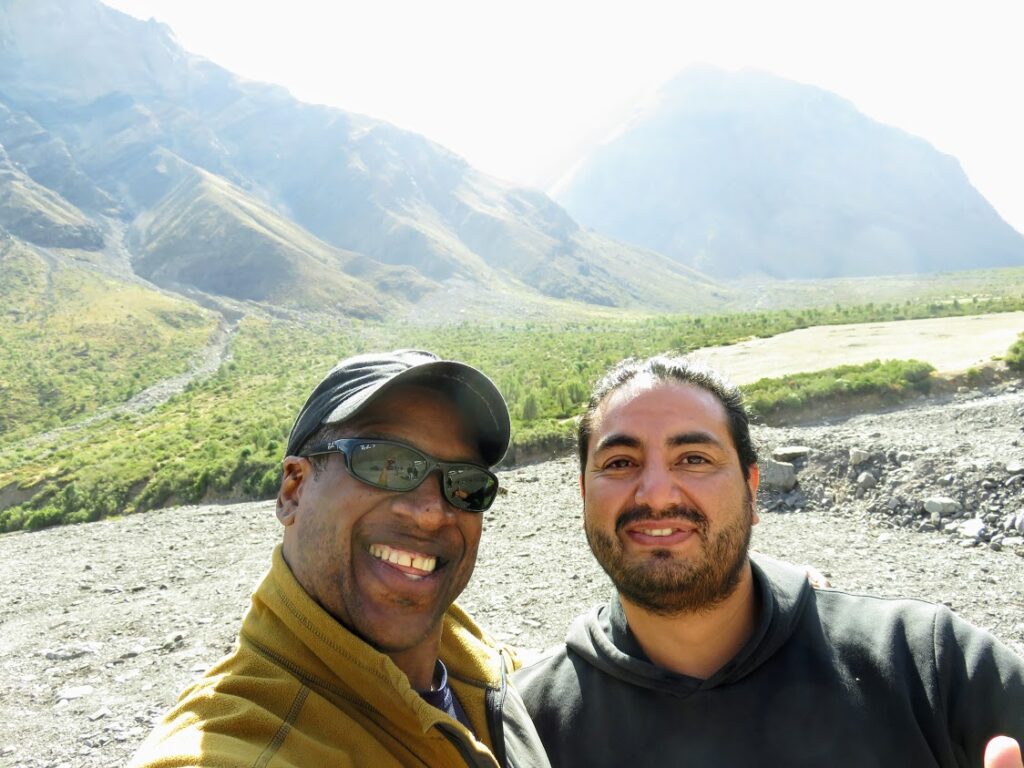 Emanuel (Manu) and I are still in touch to this day. I told him when I become a better writer, I would write a story on him. I have worried about all the incredible people I met on my travels during this pandemic. Tourism and travel has suffered greatly during this time and I wonder what it will look like after this. The endless safety guidelines and precautions that all must undergo feels like the experience that I had with Manu in 2019 can never be replicated. Makes me even more grateful that I availed myself to an experience I’ll never forget. When Manu dropped me off at the end of the day at my hotel, I knew that would not be the last time I would see him. That belief still holds, as I look forward to returning and exploring more of Chile in the hopefully not too distant future.

While travel is a great way to learn about other cultures, it’s also a great way to learn about yourself. From the time I left home to study theatre in London as a teenager, I’ve learned more about myself than in any of the 20 some odd countries I’ve visited since. The sites and the people inspire, but putting oneself in the ‘room where it happens’, educates and informs and hones the senses. My decision making became clearer through travel. I learned what I liked and didn’t through travel. It promotes tolerance and a sense of one’s place in the world. A smile (and my laugh) has always been my ‘international language’ and, believe me, I’ve never had a problem so long as I pack those with me. They’re easy and cheap. Just like me!

Have you ever had a near-death experience while traveling?

Chris, That is such an amazing story and video. Your eyes at the end, you saw something life changing and it shows. So good. Thank you for sharing the story. BA

Thanks for reading, watching and commenting BA! That was clearly an experience for the ages!

Thanks Kimm. That would be amazing!

Ah, dear Chris, you made me cry this morning. When reading your reaction to the mountains; its altitude, it felt more spiritual than physical. I believe that's why Manu took you back there the following day.

Once again thank you. Thank you are the only words that seem appropriate right now.

Thank YOU Miche! Your support means the world to me. Thanks for commenting!❤️