More important than the school itself? 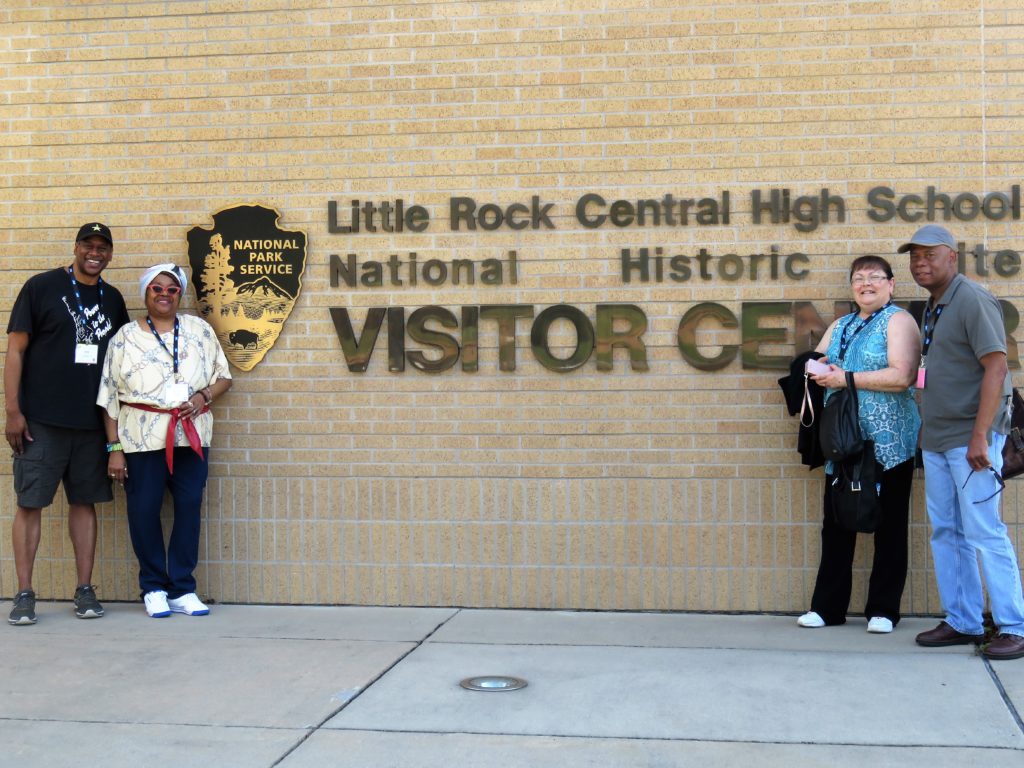 The most important in America?

A while ago, I attended a travel writers conference in Little Rock, Arkansas. Having done my research prior to, I knew that I would make it a point to see Central High School, the first school to integrate in 1957 with ‘The Little Rock Nine’. 9 African American students between the ages of 14 to 17, chosen to be the first, and by so doing, through unimaginable circumstances, would change the course of history and education in America.

As luck would have it, we were given a few hours on day 2 of the heavily scheduled conference to go out into Little Rock and find a story. Located just 15 minutes drive from downtown Little Rock, my new fellow travel writer friends and I grabbed an Uber and headed over there, not knowing if we could turn the visit into a story or not. Open every day except Thanksgiving, Christmas and New Years Day, from 9 to 430p and run by the National Park service, frankly it look closed as we approached the building adjacent to the famous landmark. Park rangers quickly welcomed us upon entering and gave a brief rundown of the center, which is really more like an interactive museum, offering a wealth of information, film clips, exhibits and audio, allowing the visitor to immerse oneself in that “Year of Reckoning’, a moment in time when America was forced to answer the age old question, “Who are we really?” 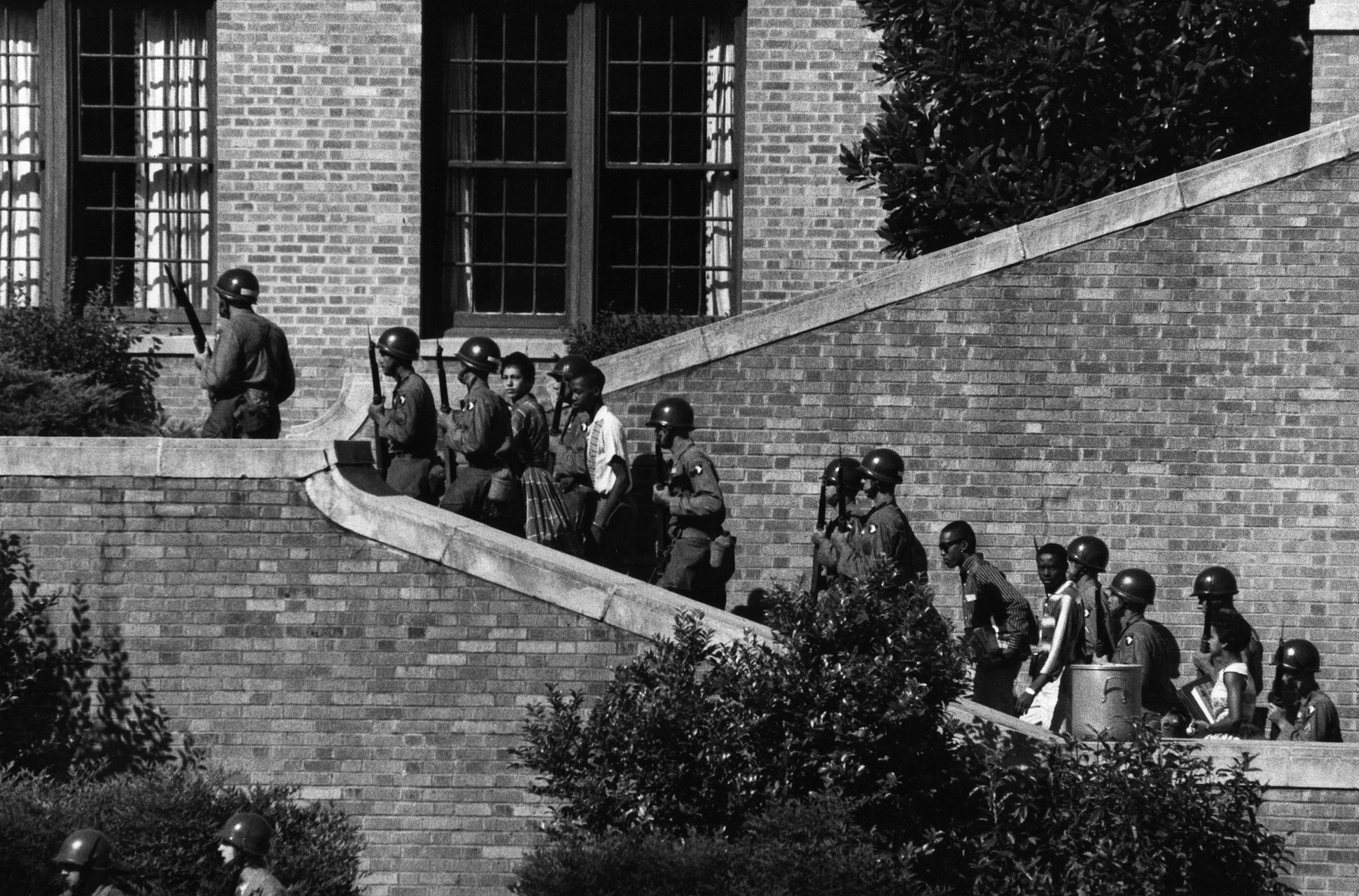 the LR9 being escorted by federal marshalls into Central High 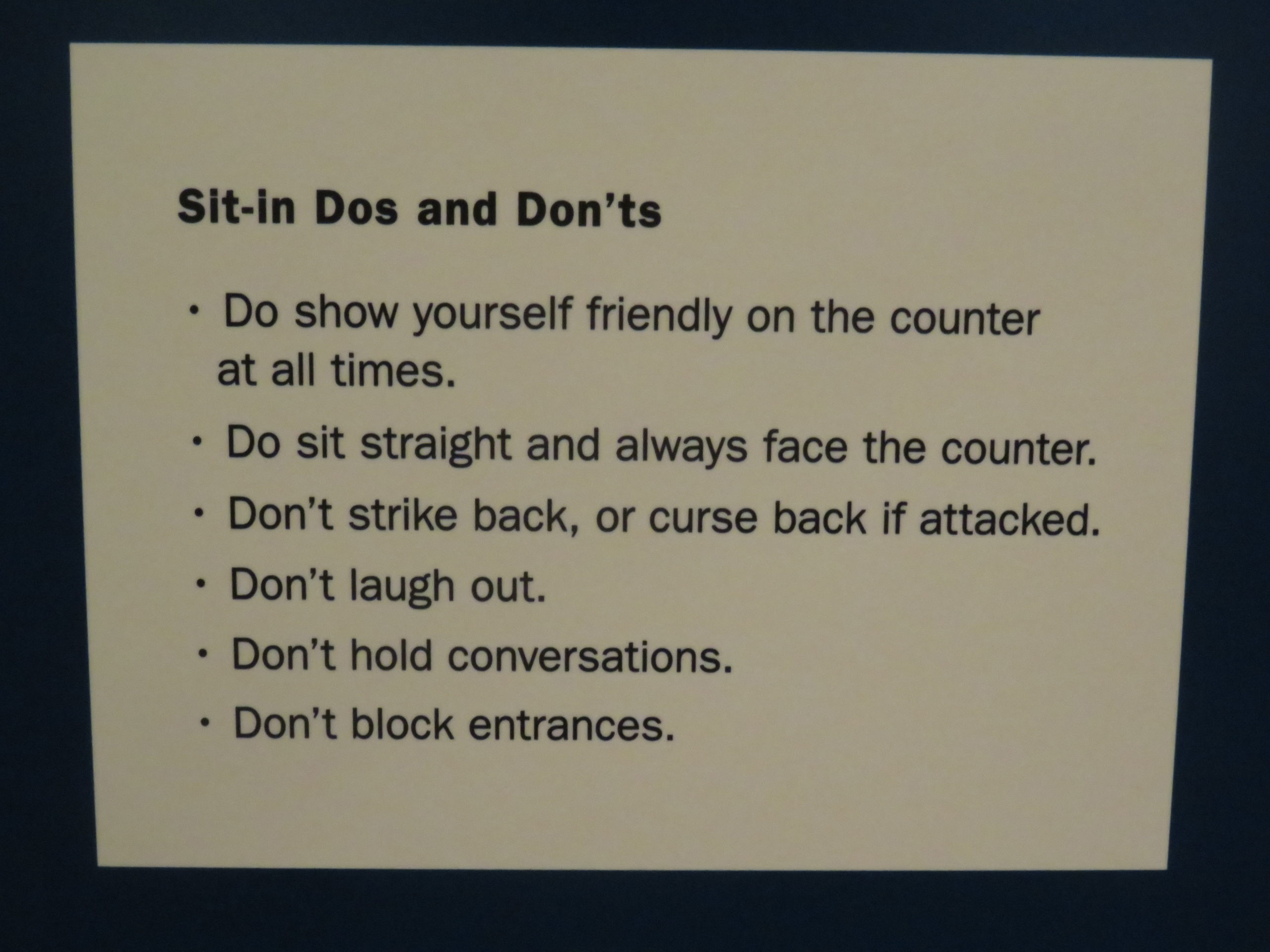 instructions for the LR9 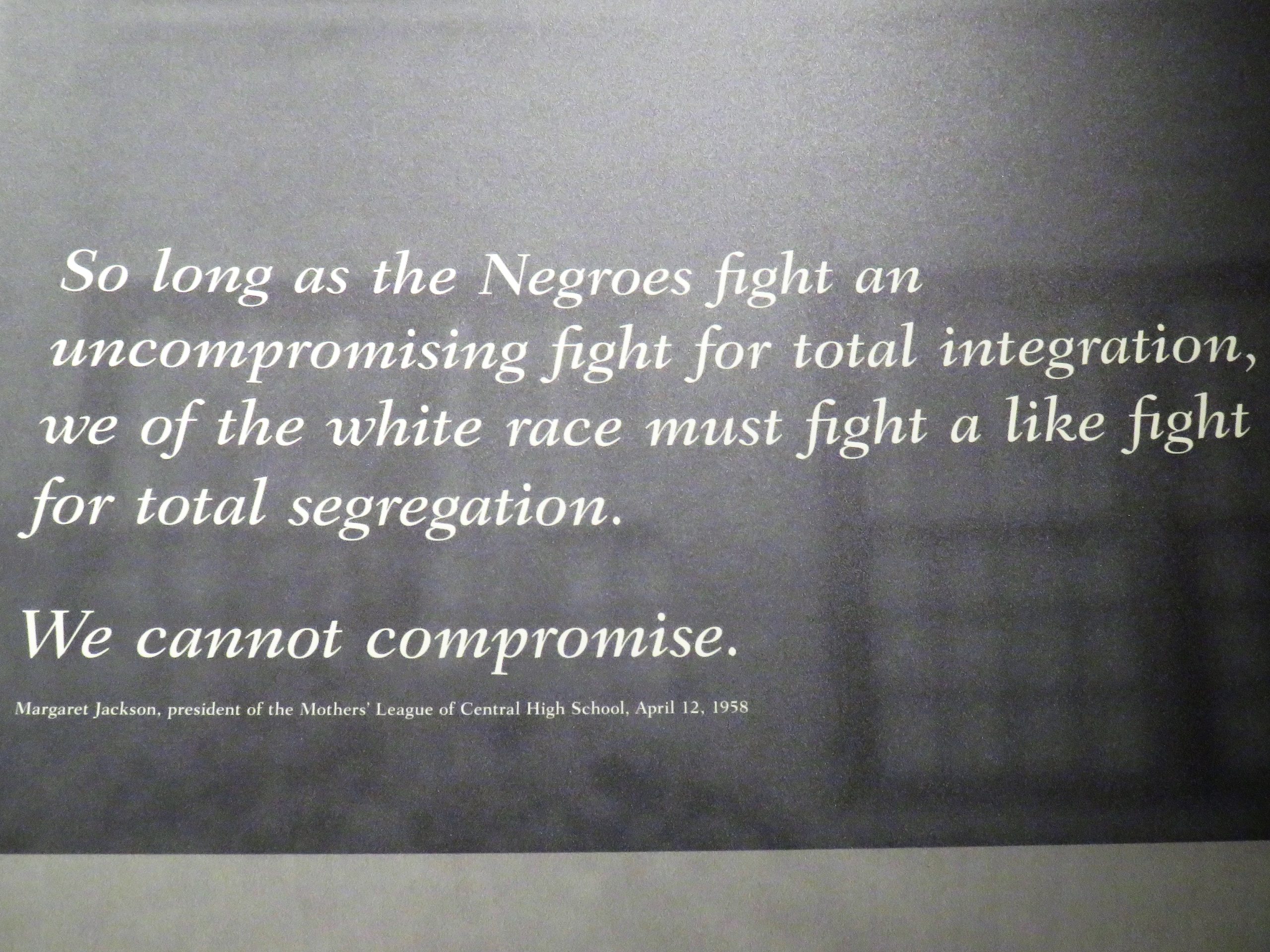 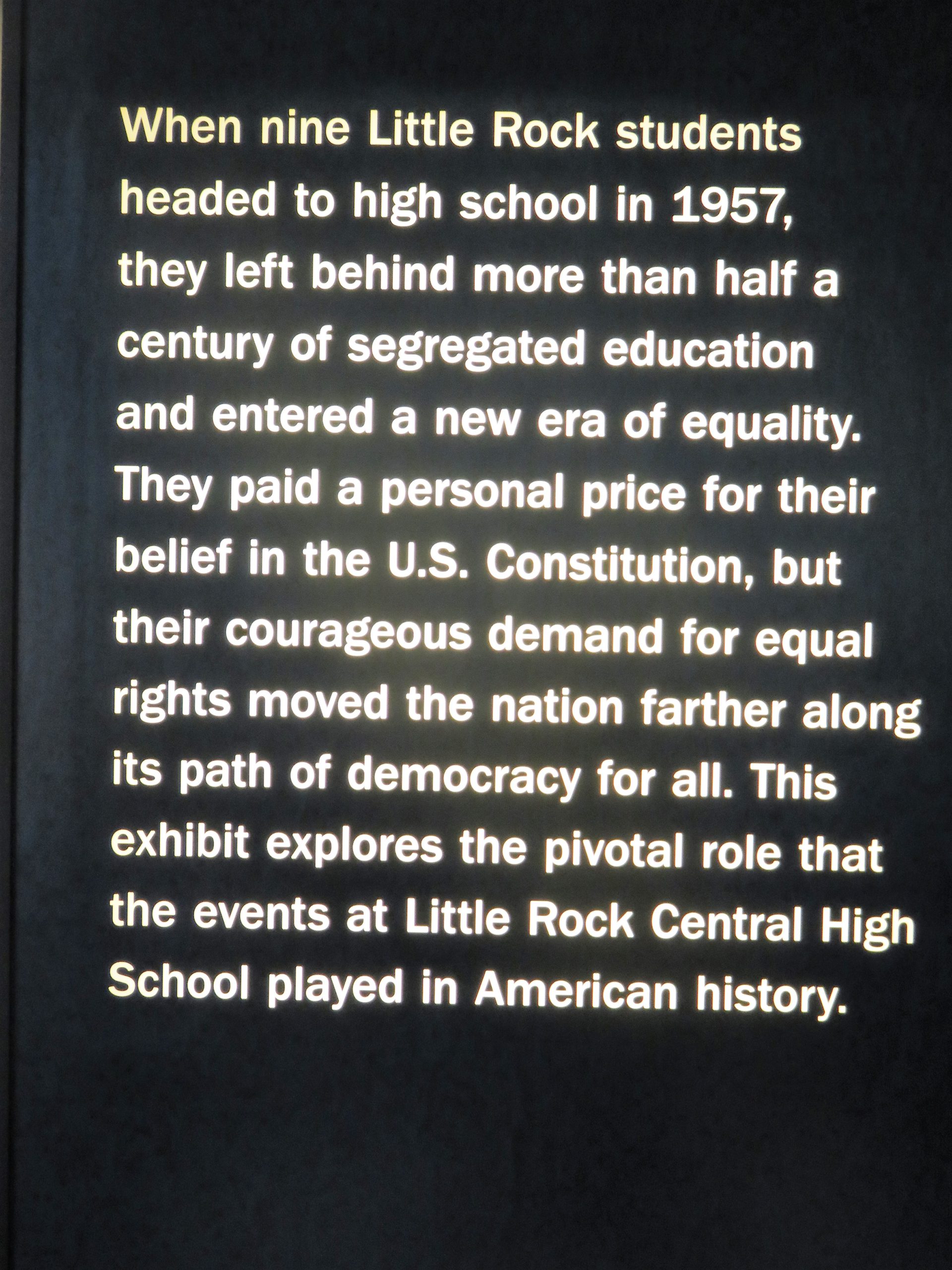 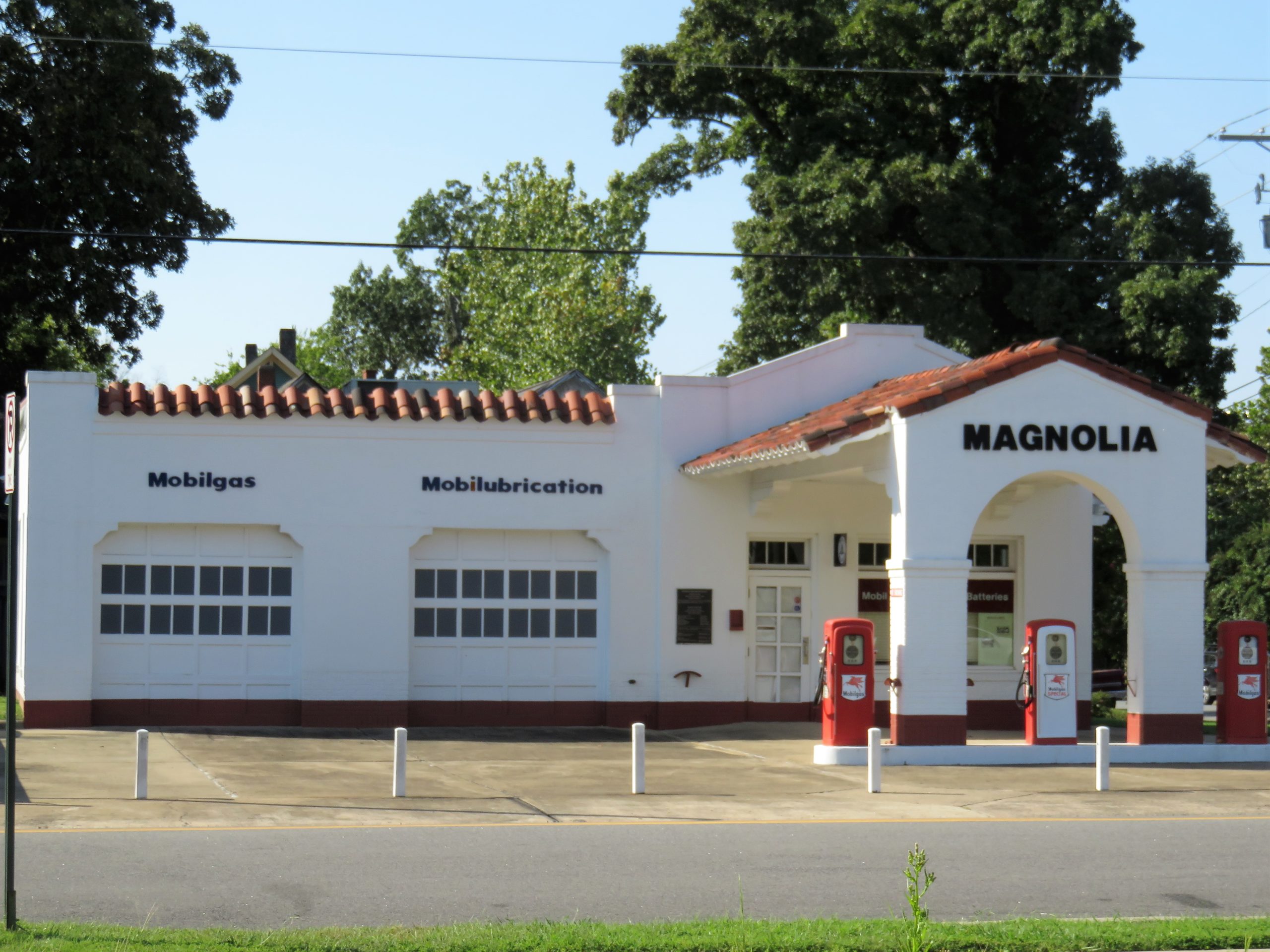 the famous gas station, also a landmark, preserved from the time 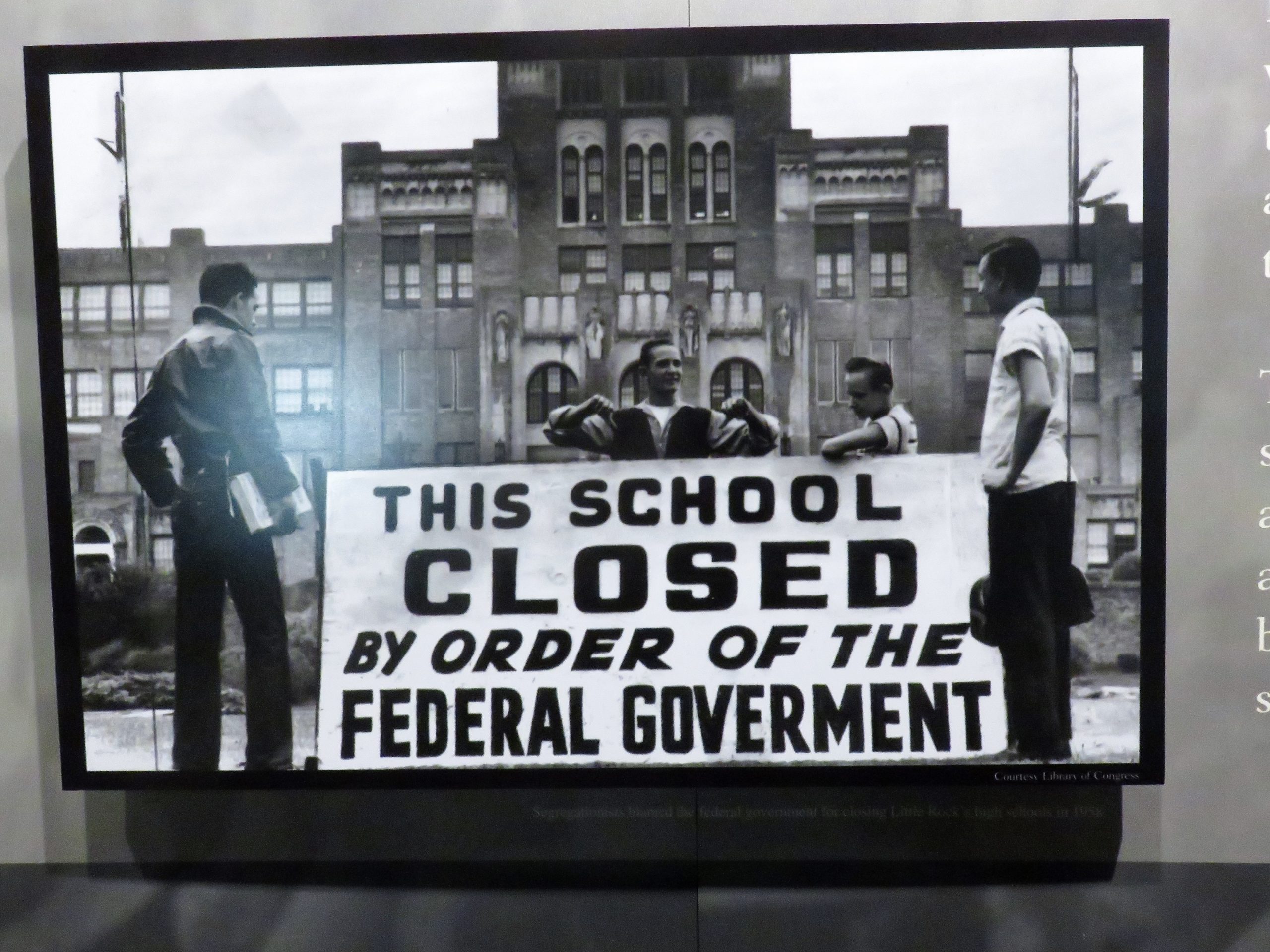 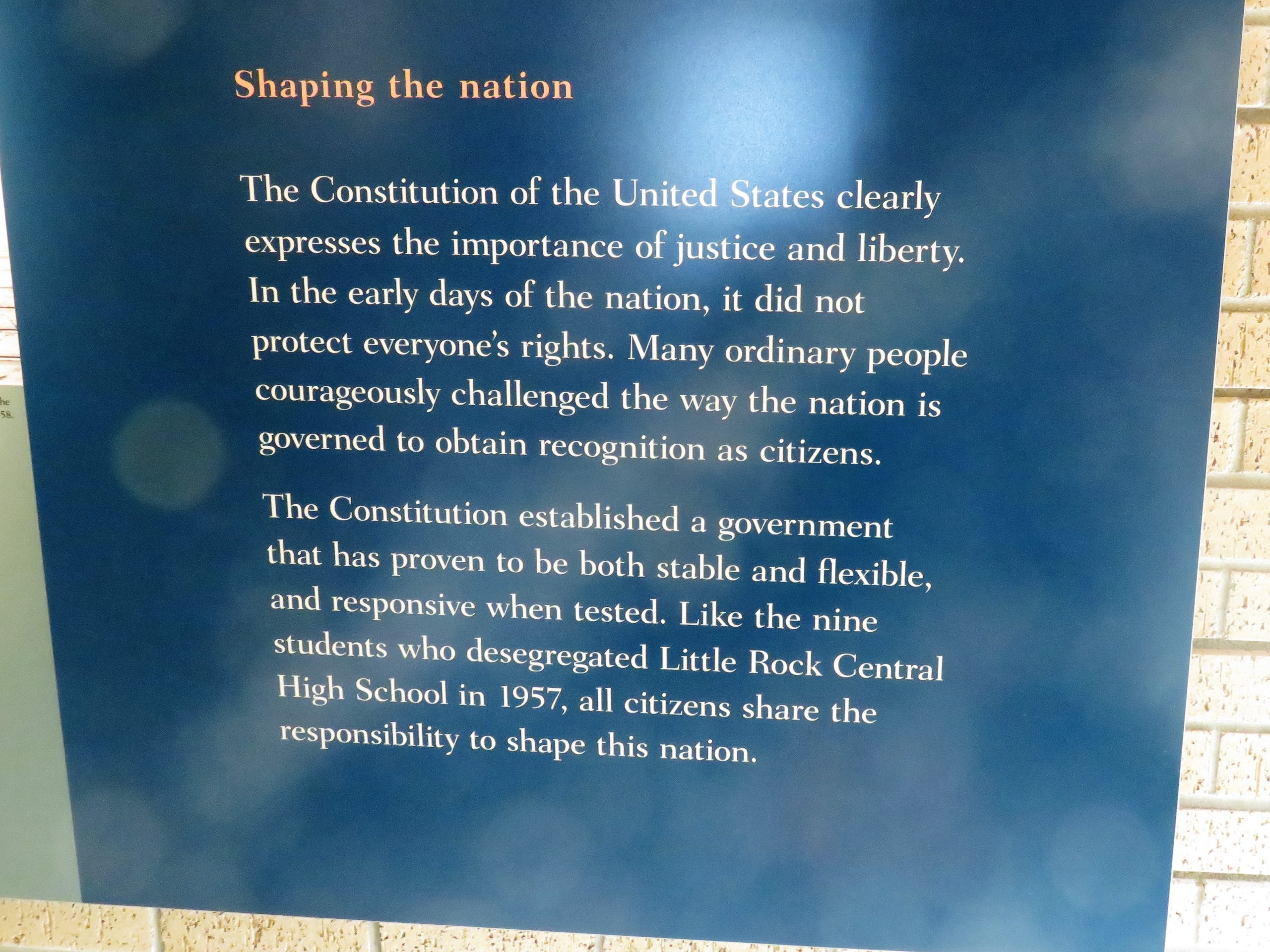 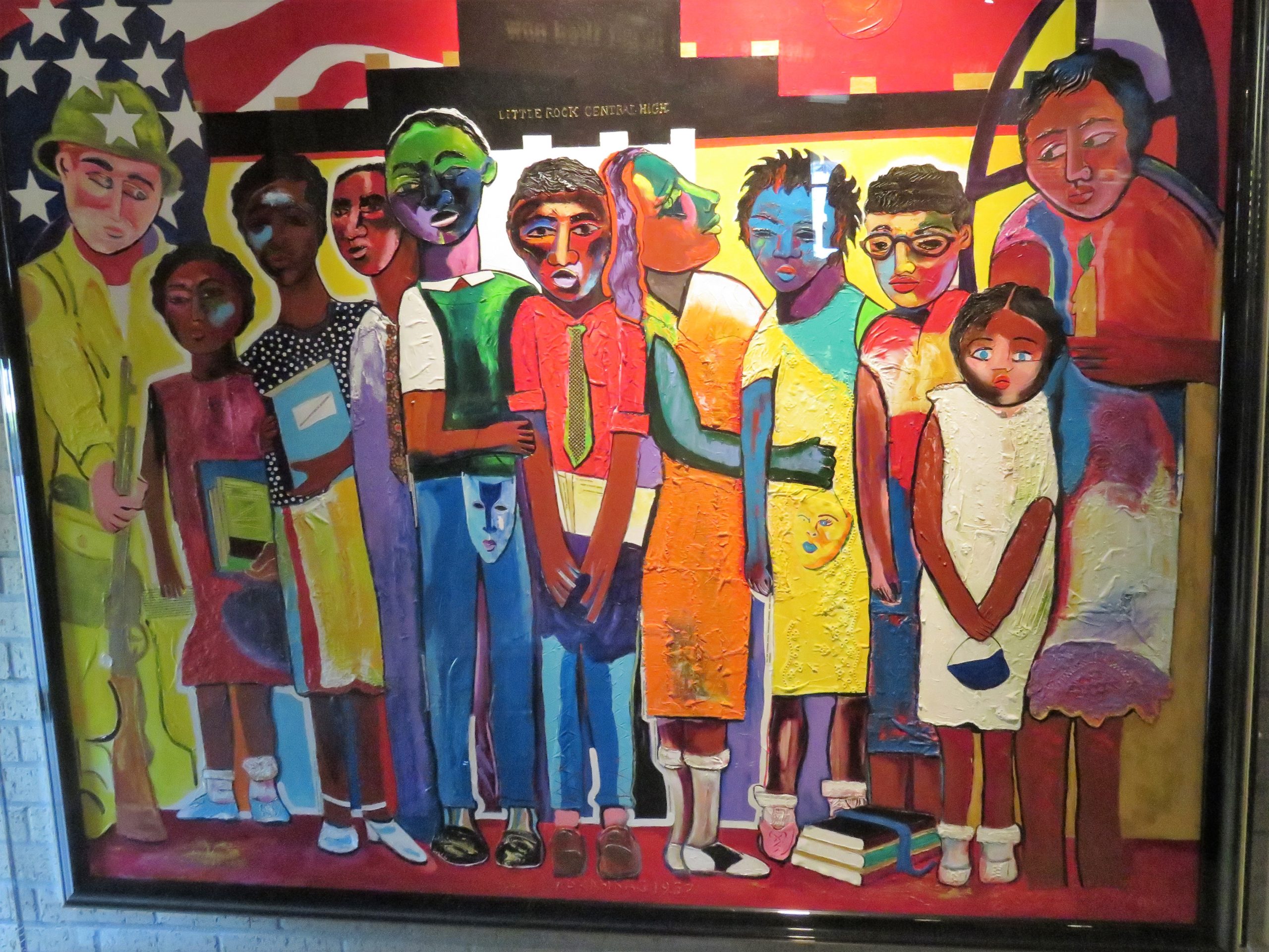 a painting of the LR9 became a postage stamp in 2005 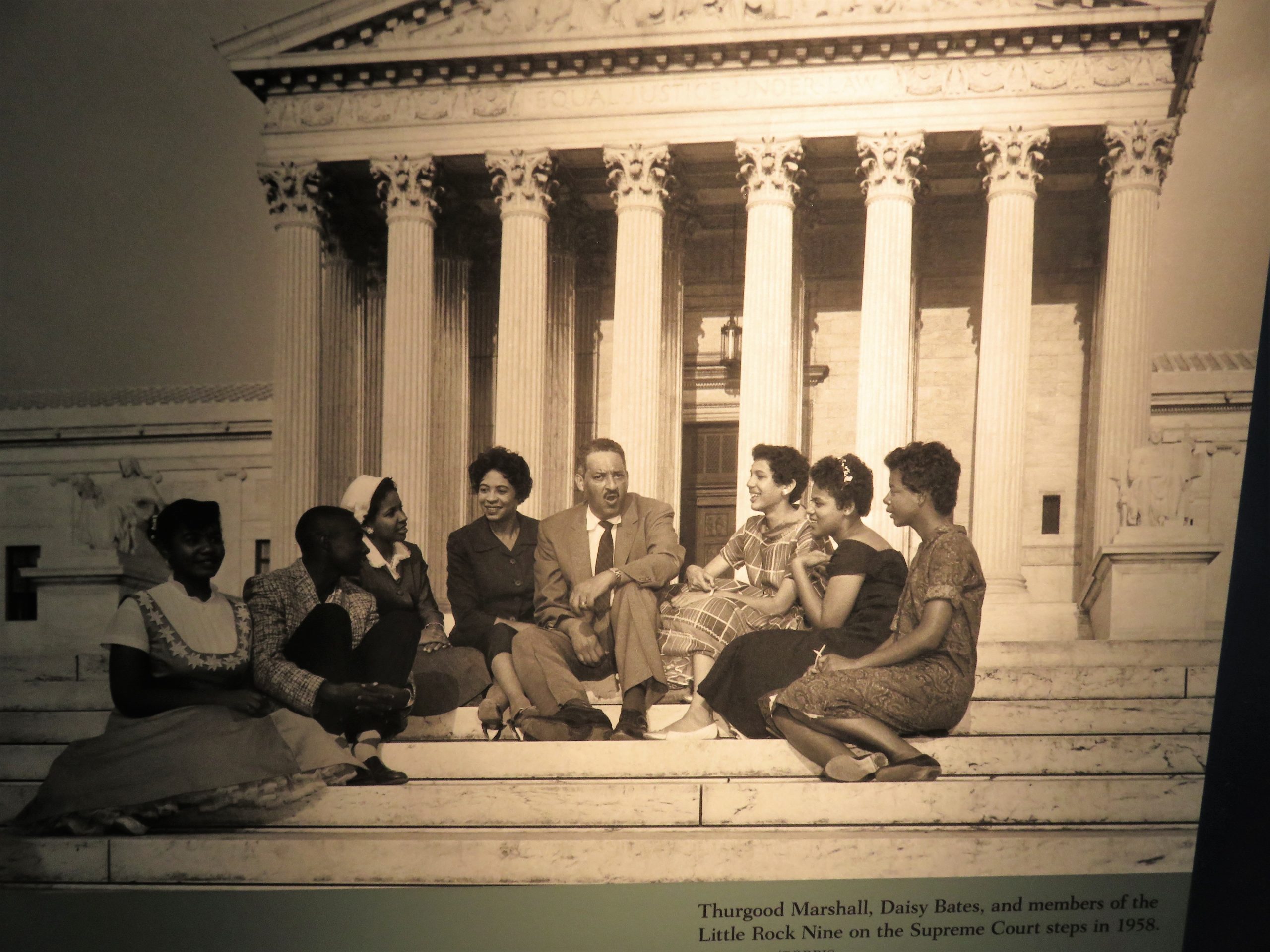 Justice Thurgood Marshall, Daisy Bates and some of the LR9 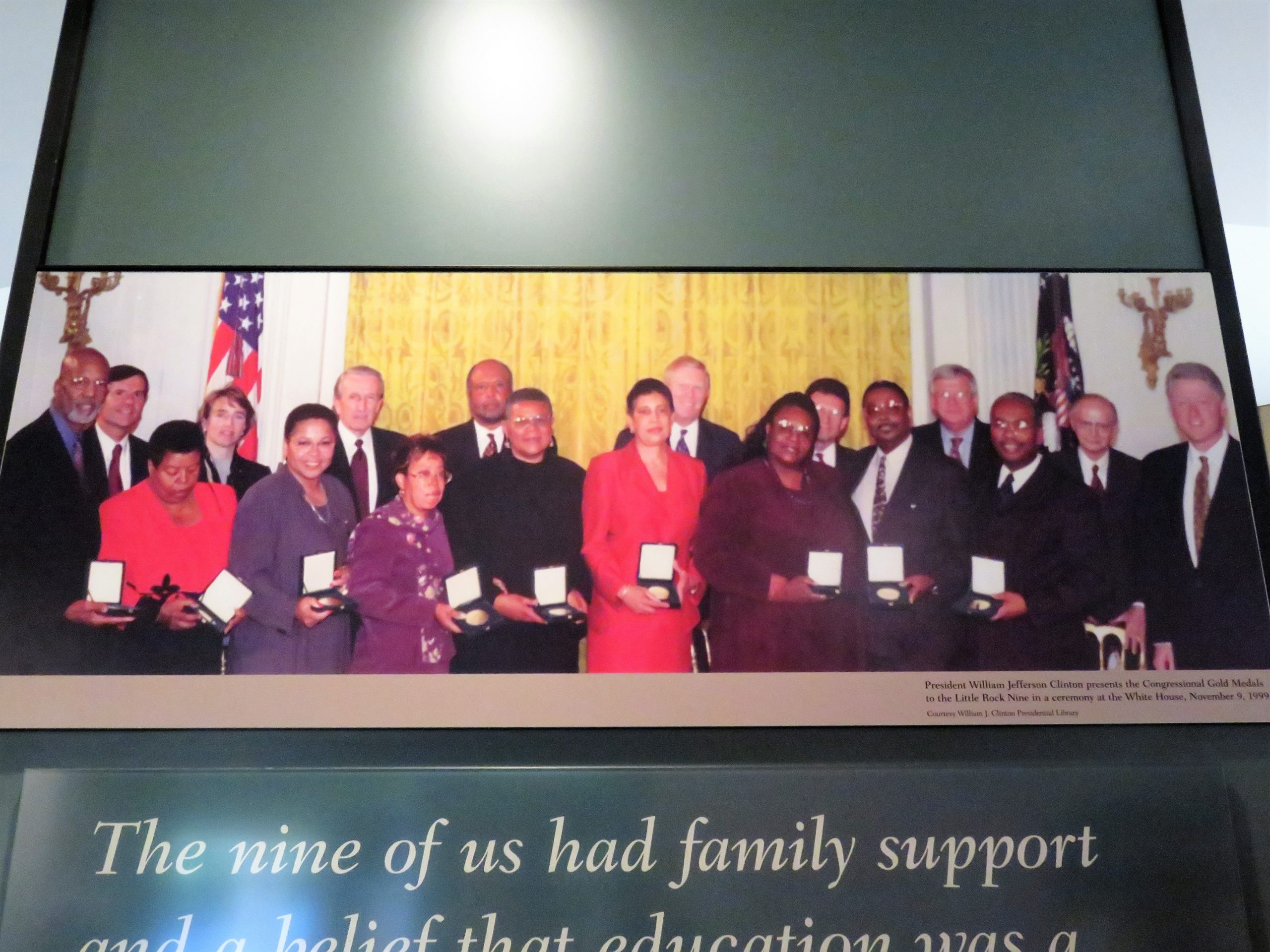 the LR9 being honored by President Bill Clinton 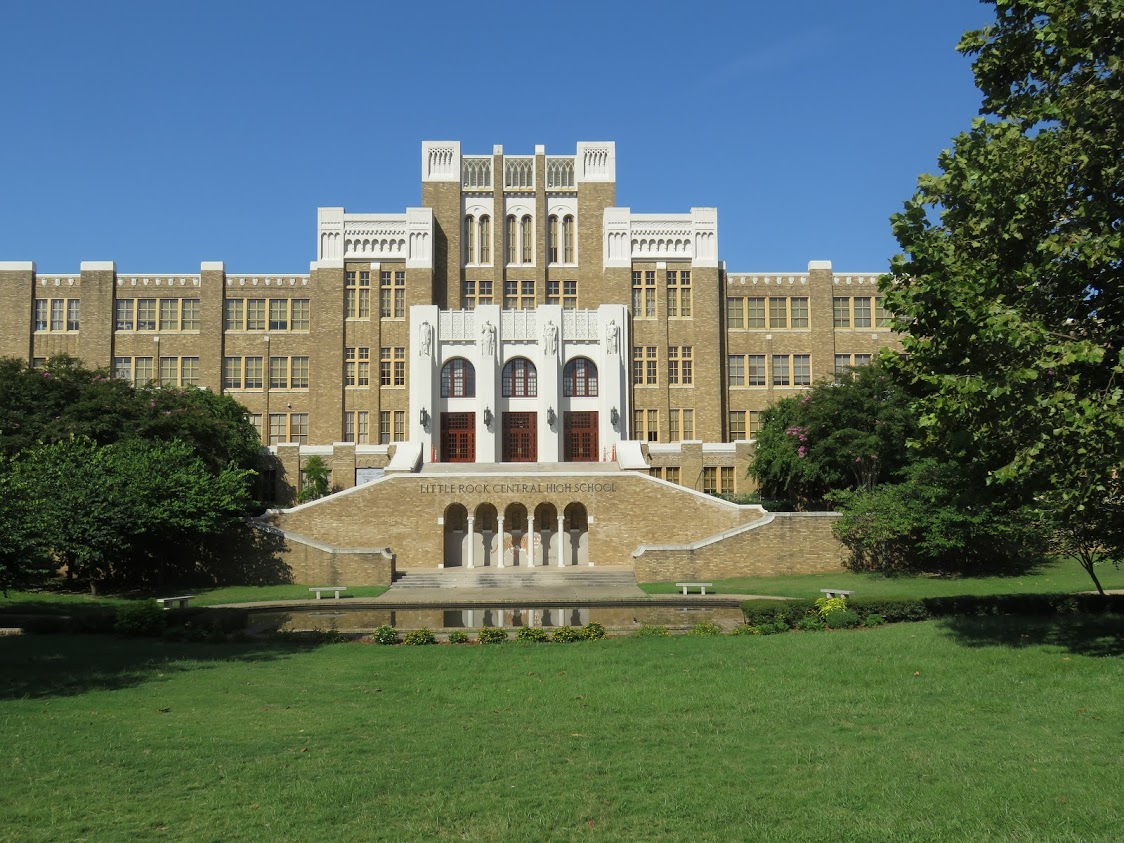 It is impossible to fathom the emotions that place evokes. I spent 3 hours following the journey of 9 children, of high academic status, as they attempted to go to an institution where they were clearly not welcomed. It was the dawning age of television, you see familiar names like President Dwight D Eisenhower, Governor Faubus, Justice Thurgood Marshall and 1954’s Brown v the Board of Education. You relive the harrowing series of events, in the students own words, as the country was glued to the coverage with young journalist Mike Wallace. It’s a palpable tale, one that resonates all the way to 2020. It’s also a sad reminder of how fear can stifle progression but ultimately cannot prevent it.

I shed many tears during my visit to the center, at one point having to remove myself and go outside and tell myself to breathe. Though I had a basic knowledge of those events, the details were never taught in the schools I attended and I felt completely ignorant although I had previously considered myself well educated. sparking the saying “The more I learn, the more I realize the less I know.”

The Central High School Visitors Center affirmed many things for me. One can never learn enough and travel is essential. In addition, the importance of knowledge of the history of America. As I have traveled to many places and hope to travel to many more, I always tell people “there’s no place like home.” I consider myself one of the luckiest people in the world to be born in this country and the Central High School visitors center re-afirmed that. I’m grateful to the Little Rock Nine and their incredible courage and fortitude. Were it not for them, I could not have enjoyed the opportunities that were afforded to me through education. Knowledge is indeed Power and I feel that all Americans would gain power from a visit to the Central High School visitors center. Tours are also available as it is an active school. Reservations are required,

While in Little Rock, I stayed at the Marriott Bonvoy, which I can recommend, although no pool. 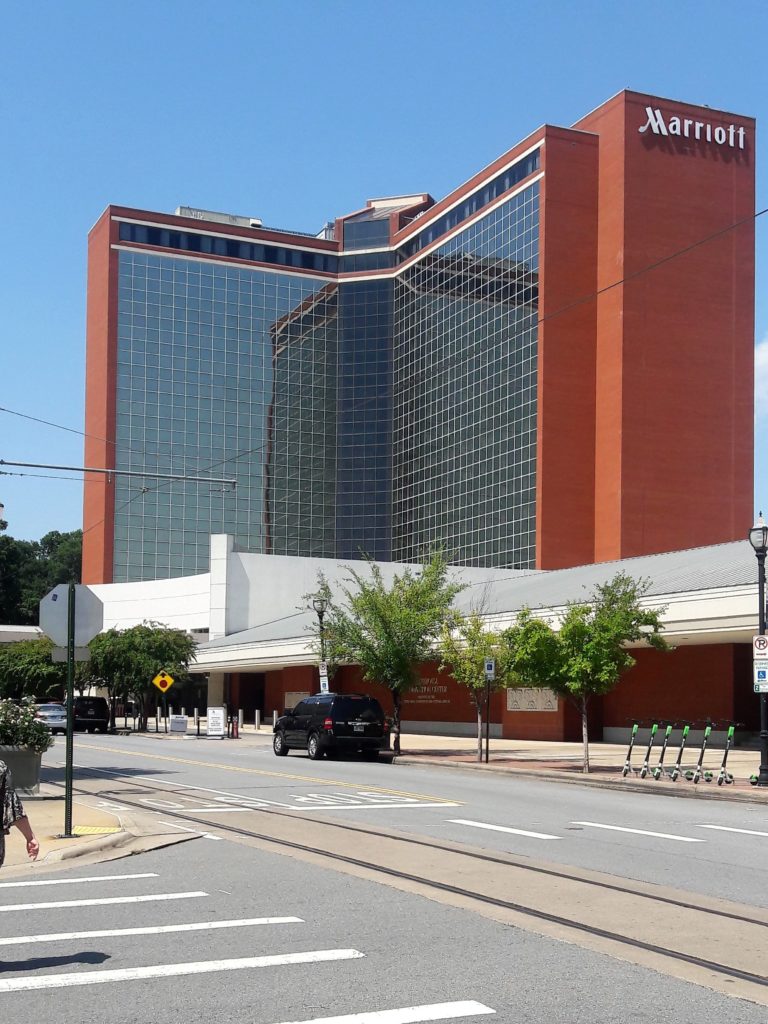 This is very interesting, You’re a very skilled blogger. I’ve joined your feed and look forward to seeking more of your great post. Also, I’ve shared your site in my social networks!

Hey there. I discovered your web site by means of Google at the same time as searching for a comparable topic, your web site came up. It appears great. I’ve bookmarked it in my google bookmarks to come back then.

I love it.. there's nothing like good old fashioned learning.. sight and see. Keep up the good work